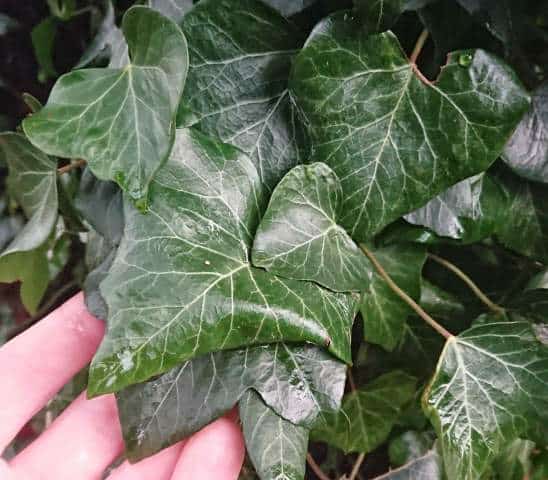 Ivy leaves turn yellow because of excess water around the roots due to over watering, slow draining soils or pots without drainage holes in the base. Yellow ivy leaves can also indicate a lack of nitrogen in the soil or the ivy roots are pot bound and cannot access the nutrients they require causing the leaves to turn yellow.

Keep reading for why your ivy plants leaves are turning yellow and how to save the ivy….

Ivy plants are native to woodlands and forests where they grow in moist yet well draining areaeted soil.

By far the most common reason for ivy plants to turn yellow is due to excess moisture around the root ball as they do not tolerate damp, slow draining or boggy soil around the roots for long periods.

If the soil around the roots of the ivy plants is boggy, then this excludes oxygen from the soil which prevents root respiration and interferes with the ivy’s ability to uptake water and nutrients causing the leaves to turn yellow and drop off with the plant dying back.

Too much water around the ivy’s root can be due to:

If the Ivy is in saturated soil for a long time then this causes the fungal disease root rot which can cause the plant to die back. To save the Ivy plant it is important to replicate the well draining soil conditions of the plants native woodland environment.

Save Ivy with Yellow Leaves Because of Saturated Soil

Once the right balance of watering and drainage has been achieved your ivy should begin to recover. How long it takes to recover depends on however long it was exposed to overly damp soil conditions.

In the Spring and Summer new healthy growth should emerge. However extensive periods of saturated soil can cause root rot, at which point it is very difficult to revive the ivy plant.

(Read my article how to water ivy plants to learn how to establish the optimal watering frequency for ivy plants in your home or garden).

Lack of Nutrients Cause Ivy Leaves to Turn Yellow

Ivy is a vine which grows abundant leaves which means it requires relatively nutrient rich soil to grow healthy green (or variegated) leaves to fuel its growth.

If the Ivy has been in the same pot for many years then the ivy’s roots may have exhausted the available nutrients in the potting soil which turns the leaves yellow.

This can cause the leaves of your ivy to turn yellow due to a lack of nitrogen, iron or magnesium in the soil.

Which specific nutrient deficiency is responsible for your ivy leaves turning yellow is difficult to determine, but ultimately the treatment is the same regardless of the cause.

Save Ivy Plants with Yellow Leaves Due to Lack of Nutrients

To save ivy plants with yellow leaves, you should transplant the ivy to a larger pot or container with new soil. A larger pot has more capacity for soil so that the roots have greater access to the nutrients the require.

This should help to address the problem and the ivy should starts growing new green leaves once it has chance to establish in the potting soil. The yellow leaves may not necessary green up but once new green growth starts to emerge from your ivy, you can cut back the vines with yellow leaves to stimulate more growth and help the plant recover.

It is best practice to fertilizer potted ivy plants once a month with a general house plant fertilizer during the Spring and Summer when the Ivy is actively growing.

A well balanced liquid fertilizer ensuring that the ivy plant has access to all the nutrients it requires to grow healthy and green to avoid the leaves turning yellow.

Using a well balanced fertilizer is always better then trying to treat individual deficiencies as an abundance of one nutrient can may it more difficult for the ivy’s roots to uptake another nutrient.

(Read my article, how to revive a dying ivy plant if your ivy plant looks unhealthy).

Ivy is a very hardy plant that is rarely affected by pests and diseases. However if the ivy is unhealthy due to under watering, over watering or a nutrient deficiency then this can make the plant more vulnerable to attack from spider mites which cause small pin sized yellow dots on the leaves.

Spider mites can be more prevalent on indoors ivy plants as the indoor environment tends to be much lower in humidity compared to outdoors which promotes the conditions for spider mites to thrive.

The way to prevent and tackle spider mites is fortunately very easy. Spider mites thrive in low humidity whereas ivy prefers some humidity, so mist the leaves with water once or twice per week to create a humid micro-climate around the ivy leaves which deters the spider mites and creates more favorable conditions for the ivy.

To address the spider mite problem immediately the best option is to use an insecticidal soap derived from neem oil as whilst this kills spider mites, it does not harm other wildlife or pets.

Neem oil can be wiped over the ivy leaves with a cloth to prevent any further yellowing of the ivy leaves as quickly as once application, although it can take 2 or 3 applications if there is a significant infestation.

Once the spider mites have been dealt with you can snip back any badly affected yellowing leaves and the ivy should recover well.