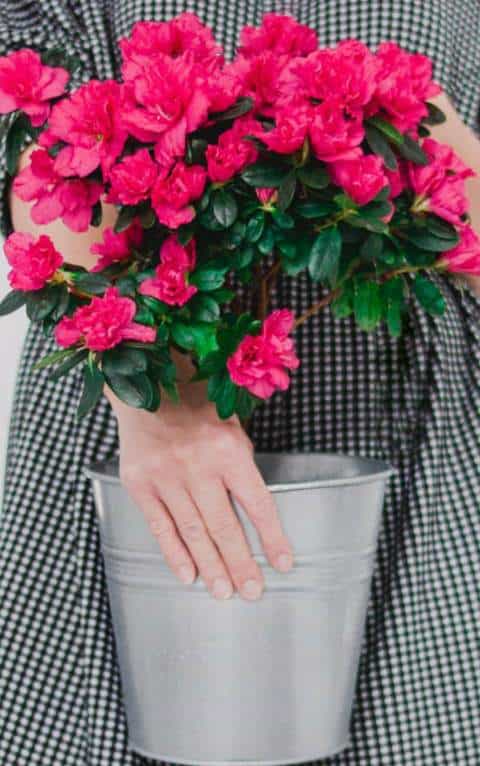 Azaleas can make great indoor plants as most varieties of azalea are evergreen, they only require partial sun and smaller cultivars can maintain a nice compact shape and produce abundant flowers in the Spring.

Some Indoor azaleas varities are also popular subjects for bonsai trees due their compact size, evergreen foliage and relative ease of cultivation.

However, indoor azalea leaves can fall off because of fluctuating indoors temperatures. Leaf fall is almost always a sign that the azalea is stressed due to persistent high temperatures or the contrast of temperatures in a house through the day and night because of heating or air conditioning.

Leaf drop can occur for several reasons such as:

The most common culprit for causing an azalea to lose its leaves is a lack of temperature stability when indoors, particularly in the Winter when the heating is turned up.

The temperature of a home can vary significantly over 24 hours and often is very different from the natural cycle of temperatures that are experienced in an azaleas natural habitat.

Azaleas grow best indoors when the temperature is relatively stable and fairly cool. The plant is quite capable of tolerating heat from a sunny window for a few hours before being shaded in the afternoon. However, high temperatures at night are contrary what azaleas are naturally accustomed to.

Consider the location of the azalea and whether it is in close proximity to sources of heat such as radiators, forced air or log burning fire places.

A blast of heat from any of these sources at night will increase the likelyhood of drought, potentially even root rot and cause the leaves to fall as a response.

Keep the azalea in a cooler room of your house (often kitchens are cooler then living rooms) and away from sources of heat. The house doesn’t have to be cold for an azalea to live indoors just that the temperature does not contrast drastically at different times.

Some azaleas also will appreciate cooler temperatures in Winter to replicate the season cycle for their period of dormancy from the end of Fall to early Spring. This period of cool can be crucial to stimulate the formation of flower buds for blooms in the Spring, hence the importance of finding a nice cool area of the house for you azalea.

If temperatures are the cause of leaf drop then azaleas are likely to recover once you place them in a more consistently cool room of the house. The amount of time it takes to recover will depend on the extent of the leaf drop but it may take another growing season to return the foliage.

Top tip: Azalea can also be susceptible to a certain amount of shock when you bring them home from the garden store or nursery.

This is why I recommend that you purchase your plants from a nursery where possible so you can talk to the staff about the conditions the azalea has been growing and what it is now accustomed to (such as in a greenhouse or outdoors), so you can mimic the ideal conditions or assess how hardy the azalea variety is and allow the plant to adjust to your home (azaleas are reasonably adaptable).

Bear in mind as long as they are cared for properly, azaleas are well suited to indoors and can live more then 100 years.

Other causes of leaf drop

Fluctuating temperatures and excessive heat is usually the culprit for leaf drop however there are other causes that may be responsible which relate to the care and conditions of the azalea.

Azaleas require moist soil, which is achieved with good potting soil (read my guide for the optimal potting mix for azaleas) and relatively frequent watering, although the soil should not be saturated.

Heat and cool air from air conditioning can increase soil evaporation and dry out the plant surprisingly quickly. This is compounded by the fact that azaleas have relatively shallow root systems and pots have a tendency to dry out quickly.

The symptoms of drought are usually a wilting appearance and leaves that curl up at the end, but leaf drop is another potential sign of stress.

Read my article on how much and how often to water azaleas for more information an best practices, but generally my advice is to water the azalea as often as required to keep the soil moist (but not water logged) which may be 2 or 3 times per week and always use a generous amount of water.

On the other side of the spectrum is water logged soil which can be because of decorative pots without drainage holes in the base or the use of a water tray which catches water and keeps the soil saturated rather then the preferred balance of moist soil that is also well draining.

Again, symptoms of an azalea with too much water tend to be a drooping appearance with leaves that turn yellow/brown, however leaf drop may also be a problem, especially when combined with high indoor temperatures.

Studies have shown that a warm house and saturated soil will promote the conditions in which the fugal disease root rot (Phytophthora) thrives and poses a serious threat to your azalea.

Choosing the right pot for you azalea is essential with drainage holes in base and I recommend adding a layer of gravel at the base of the pot to increase drainage.

The right potting soil is very important too as azaleas require soil that is consistently moist yet is still well draining. For a full explanation, read my article on potting mix for azaleas.

Azaleas require an acidic soil with a pH of 4-6 to grow. If the soil is nearer to pH neutral (7) or alkaline then the azaleas growth will be stunted, the foliage turns yellow and there may be some leaf drop, hence the importance of preparing the potting soil and ensuring the right level of acidity before hand. Read my article for solutions to azaleas with yellow leaves.

Transplant your azalea into ericaceous (acidic) compost and the plant should recover for the next growing season.

Azaleas prefer partial shade with either dappled light or up to 4 hours of sun per day with shade in the middy and afternoon. Too much sun can burn the leaves and not enough sun will limit growth.

Move the potted azalea around until you find the right balance of sun and shade. This should increase the health and resilience of the plant which should help to prevent leaf drop and increase the life span.