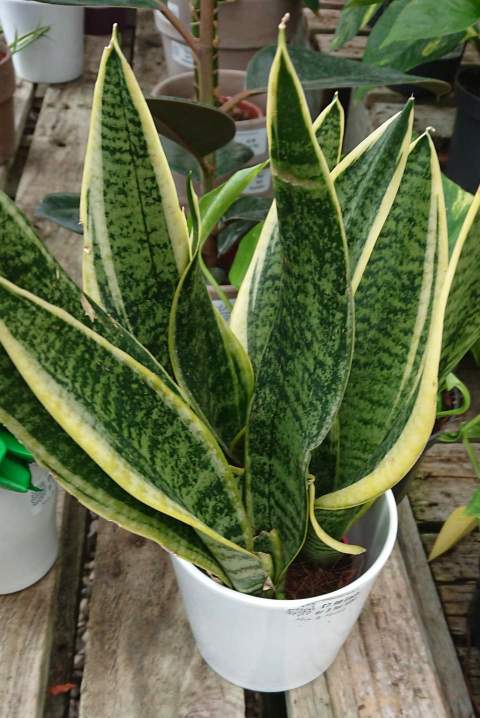 The reason for snake plant leaves turning yellow is usually because they are scorched by too much direct sunlight. Snake plants have sensitive leaves that are adapted to grow in the shade or filtered light, rather then full sun, which causes the leaves to turn yellow.

This does not indicate that there is necessarily anything wrong with your snake plant as this is a natural part of the plants cycle as it matures.

Snake plants are native to the African countries of Nigeria across to Tanzania, where they have adapted to grow in the shade under a forest canopy protected from direct sunshine from foliage overhead, therefore their leaves tend to scorch yellow when they are in too much sun.

If they are turning yellow due to sun burn the leaves often feel firm rather then mushy, but perhaps thinner then they were as they snake plant draws upon the moisture reserves in the leaves to cope with the increase in light and heat. (Snake plants with yellow leaves due root rot are usually mushy).

Snake plants are a adaptable, hardy species of succulent that can tolerate full shade (although this can cause the snake plant to stop growing) or bright light with some filtered light or even some direct sun.

However it can take time for the leaves to adjust to any increase in light intensity. Snake plants often turn yellow when they are moved from a location of relative shade to a much brighter, sunny location as the contrast in conditions causes them to scorch a pale yellow.

This can often happen after the snake plant has been bought, from the store or garden center, where they grown in a shady area then when the are brought into they house, the snake plant’s sensitive leaves immediately have to contend with strong sunshine, if they are on a sunny window sill.

To save a snake plant with yellow leaves, move the plant to a shadier are of the house. Any location with bright indirect light is optimal for the recovering snake plant.

The individual yellow, scorched leaves typically do not recover their appearance once they have been scorched.

If they are severely scorched yellow the leaves do not turn green again and they cannot photosynthesis and provide the snake plant with energy.

Continue caring for the snake plant as usual, with a good watering schedule and when the snake plant shows signs of new growth, (usually in the Spring or Summer) then you can cut any scorched leaves back to the base of the plant with a sharp pair of pruners.

When the snake plant starts new growth, it is much more resilient to pruning and it is a good sign that the conditions are more favorable for the snake plant to recover.

Pruning tidies up the appearance of the plant, stimulates new growth and removes the scorched leaves so that the snake plant can prioritize the growth or new, healthy green leaves.

It is worth noting that snake plants in very shaded areas often stop growing (Read my article, why is my snake plant not growing?)

Snake Plant Leaves Turning Yellow (and Brown), Mushy and Droopy due to Overwatering

Snake plant leaves turn yellow if there is too much moisture around their roots due to overwatering and slow draining soils. Snake plants are drought resistant and prefer the potting soil to dry out between each watering. If the snake plant is in consistently damp soil, the leaves turn yellow due to root rot.

Snake plants grow in hot and dry climates with somewhat infrequent rainfall and in gritty, well draining soils that do not retain much moisture in tropical Africa.

Watering a snake plant too often or planting it in normal, unamended potting soil, promotes the conditions for root rot which turns the leaves yellow, often with a mushy texture and drooping appearance.

The roots of the snake plant need a porous soil structure that allows space for oxygen around the roots so that the roots can respire. Too much water in the soil excludes oxygen which prevents root respiration and interferes with the roots ability to draw up nutrients and moisture which is why the leaves turn yellow with a drooping appearance.

Therefore to grow a healthy snake plant and prevent it turning yellow, it is important to mimics some of the conditions of its native environment by watering it only when the soil is dry and planting it in a well draining soil mix that emulates its natural soil conditions.

How to Save Snake Plants With Yellow, Drooping Leaves

Once you have adjusted the watering schedule, to allow the soil to dry out more between each bout of watering, and replaced the potting soil, the snake plants roots can function properly and the plant can recover.

(Read my article, how to water snake plants).

If any leaves are getting progressively more yellow, mushy and drooping, then cut these leaves back to the base to prevent the rot from spreading.

If the snake plant’s root have been in damp soil for too long then the root rot may be too severe for the plant to recover.

However you can still take cuttings for any remaining healthy leaves to use for propagation. Snake plants, like all succulents are particularly easy to propagate and you can grow a new healthy, disease free plant for free.

Watch this helpful YouTube video for how to propagate snake plants…

Should I cut Back Yellow Snake Plant Leaves?

If the snake plants leaves are turning yellow and feel mushy, due to overwatering or slow draining soils then cut these leaves back to the base of the plant with a sharp pair of pruners to prevent the rot from spreading. Removing yellow snake plant leaves helps to promote new growth.

Yellow sun burned leaves should also be cut back as they do not turn green again.

Snake plants, like all succulents have adapted to living in hot and dry climates by storing water in their thick fleshy leaves during times of rainfall, and drawing on these moisture reserves to survive extended periods of drought.

If the snake plant has been chronically underwatered then it draws upon all its moisture reserves which turns the leaves from a smooth texture to a wrinkled appearance with some yellowing of the leaf.

This can eventually result in the leaf turning crispy as an extreme reaction to drought stress.

The advice that ‘succulents such as snake plants do not need much watering’ is misinterpreted to mean that snake plants only require a small quantity of water, and only occasionally need watering.

Whilst snake plants only occasionally need watering they have adapted to thriving in a deluge of rainfall followed by drought cycle of moisture.

Therefore snake plants need a good soaking when you do water them. The water is then drawn up from the soil and stored in the leaves, which gives them a thick, plump appearance and the soil can then dry out between each watering.

How to Save a Snake Plant with Yellow, Wrinkled Leaves

Once the potting soil has been watered thoroughly, the roots can access the water they need and the snake plants wrinkled, yellow leaves should restore their appearance.

Ensure that the snake plant is in the shade, as sunburn can also cause the leaves to turn crispy.

Snake plants grow in hot and dry tropical climates and prefer temperatures between 65 and 80°F.

The stress of cold temperatures can be responsible for the leaves turning yellow and mushy at the base of the snake plant, but usually cooler temperatures causes the potting soil to dry out too slowly after watering which can result in root rot.

Therefore it is important to find a room in your house that stays between 65 and 80°F (18°C to 27°c) and wait until the soil has dried out completely before watering again.

If the leaves continue to turn yellow at the base or even black and start to droop then I recommend taking cuttings from any healthy remaining leaves for propagation to save the plant.

However if the older leaves nearer the base are dying, this is usually because the plant is directing its resources to growing the younger, larger leaves that are in brighter light.

(Read my article, how to revive a dying snake plant).