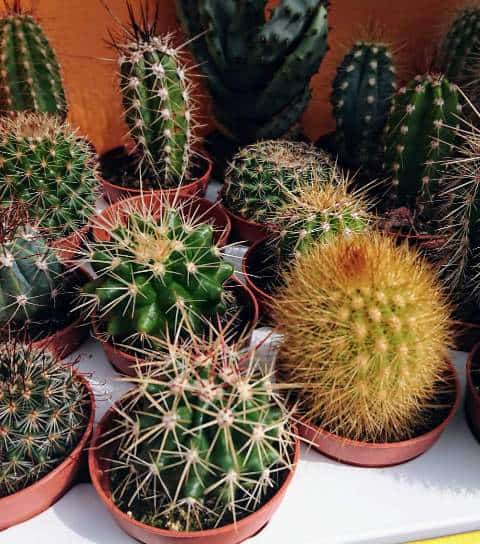 The reason for a cactus turning yellow is usually because of overwatering. Cacti are drought resistant plants that do not tolerate consistently damp soil. If the soil is too damp and does not dry out between bouts of watering, the cacti develops root rot which causes the cactus to turn yellow and soft.

Cacti turn yellow in Winter because of overwatering and temperatures lower then 40°F. Cacti are dormant during Winter, which significantly reduces their demand for water and leaves them at a higher risk of root rot due to overwatering.

Cacti can turn yellow at the top due to sun burn if they are moved from an area of relative shade to full sun without time to acclimatize to a higher light intensity.

Cacti can also turn yellow and wrinkled if they are not water often enough or watered too lightly.

To save a yellowing cactus it is important to replicate the conditions of its native environment by watering when the soil has dried out, ensuring a temperature range of 55°F to 85°F (13°C to 29°C) and removing any diseased roots with a sterile pair of pruners.

Cactus’s are drought resistant plants that have specifically adapted to thriving in warm and dry environments with well draining soils and infrequent rainfall.

To grow a cactus successfully and to avoid the leaves turning yellow and brown, it is important to recreate the conditions of the native environment by planting cacti in gritty, well draining potting soil and only watering when the soil around the roots has dried out.

If the soil is consistently damp around the roots of the cactus, due to overwatering or slow draining soils, parts of the cactus can turn yellow and brown with a soft mushy texture which can indicate root rot.

Saucers, trays and decorative outer pots can also prevent water from escaping from the pot and cause it to pool around the roots which can be the cause of root rot and result in a yellow, mushy cactus.

How to Save a Cactus Turning Yellow, Soft and Mushy

To establish when the cacti potting soil has dried out around the roots, feel the soil as the bottom of the pot through the drainage hole in the base of the pot.

If the soil feels damp, then delay watering the cactus for a few days. When the soil starts to feel dry, this is the perfect time to water your cactus.

Watering your cactus when the soil has dried out, effectively emulates the natural conditions of -rainfall followed by drought- cycle to which the cactus is specially adapted.

Once you have addressed the causes of why your cactus is turning yellow, soft and mushy, and implemented the appropriate watering schedule, the the cactus can starts to recover.

However if the root rot is extensive it can be very difficult for the cacti to recover and the best option is to propagate your cactus from any remaining healthy growth.

Cutting any yellow, soft and mushy sections of your cactus off with a sterile pair of pruners also helps to prevent the rot from spreading.

Almost all houseplant cactus plants propagate easily from pads, offshoots and even healthy portions of the stem.

Watch this helpful YouTube video, for how to easily propagate cactus plant from pads, cuttings and offshoots to save your cactus:

The reason for a cactus turning yellow in Winter is usually because of root rot due to overwatering. In Winter cacti are dormant and stop growing due to low temperature and less light which reduces their demand for water which makes them vulnerable to overwatering. Overwatered cacti turn yellow and mushy in Winter.

Cacti are more susceptible to overwatering in Winter because:

How to Save a Cactus That is Turning Yellow in Winter

The steps of how to save a yellowing cactus in Winter are otherwise the same steps set out above for saving an overwatered cactus that is yellow and mushy.

This means replacing the soil and checking the roots for root rot. Cut back any diseased roots with a sterile pair of pruners and repot the cactus.

I would recommend propagating any offsets, pads or cutting from any healthy remaining growth to help save the cactus as if the root rot it severe the main cactus stem can be difficult to save.

The reason for a cactus to turn yellow at the top is because of sun burn. Cacti can scorch yellow when they are moved from low light to full sun without anytime to adjust to the increase in light intensity. The sudden increase in light turns the cactus yellow with a scorched appearance.

Most houseplant cactus plants are native to hot and dry conditions and often tolerate full sun.

However they are often cultivated or stored in the store or nursery before sale in an environment with lower levels of light.

Cactus plants are very adaptable and adjust to their environment, even in low light conditions that are less then ideal.

But when they are moved from a shadier location to full sun or even outdoors the cactus is not accustomed to intense blazing sunshine and the sudden contrast in light intensity is the reason the cactus turns yellow.

It is often easy to identify whether sun burn is the reason for your cactus turning yellow (rather then over or under watering) because the side of the cactus that is most exposed the sun has the most scorched yellow appearance.

The sudden increase in light intensity is also associated with an increase of temperature, an increase in the rate the soil dries out after watering and usually a decrease in humidity which can also stress the cactus and contribute the the yellowing.

How to Save a Yellowing Cactus from Sun Burn

A cactus can adjust to full sun after a period of relative shade however, it should be exposed to the higher light intensity gradually by locating the cactus in the sun for 20 minutes longer each day over the course of 2 weeks or so.

This allows the cactus to acclimatize to the increase in light intensity over a period of time, which prevents the cactus from scorching yellow.

If the cactus has been scorched yellow then unfortunately it does not turn green again as the surface of the cactus does not have the capacity to recover from sun burn.

However, whilst the sunburn areas of the cactus do not look aesthetically pleasing, it should not necessarily harm the plant (assuming it has been protected from further sun damage).

The cactus should continue to grow as long as the conditions are favorable (do note that cacti go practically dormant during Winter and do not grow noticeably).

Cactus Turning Yellow and Wrinkled due to Underwatering

A common mistake when caring for cacti is to misinterpret the advice that ‘cacti do not need much water‘ to mean that a cactus only requires a small trickle of water when watering.

If the cacti is watered too lightly, only the top inch or so of the soil becomes moist and the water does not reach the roots where it is required.

The cactus also turns yellow with a wrinkled appearance if it is not watered often enough. Factors such as high temperatures, more sun in Summer and low humidity can also contribute to a yellow, drought stressed cactus.

How to Save an Yellow, Wrinkled Cactus due to Underwatering

Cactus that has turned yellow and wrinkled due to underwatering typically recover very well after 2 or 3 watering cycles. A through watering gives the cactus the opportunity to draw up moisture to replace its depleted reserves in the stem which should restore the cactus appearance.

It is important to note that a cactus can recover from a yellowing appearance due to underwatering much easier then from overwatering so always check that the soil is dry before watering.

If the reason for the cactus turning yellow is root rot, the soft yellow parts of the cactus do not turn green again and should be cut out of the cacti to prevent the rot from spreading throughout the cactus.

If the cactus has been scorched yellow by sun burn, the cactus does not turn green again. Protect the cactus from full sun and propagate any offshoots, pads or cuttings that remain undamaged to grow a new green cactus.

If the cactus is turning yellow and wrinkled from underwatering then the cactus should turn green again. Water the cactus generously, so that the soil is evenly moist. This helps to roots replenish the cacti’s moisture reserves to restore the cactus yellow appearance back to green and healthy.

(Read my article, how to revive a dying cactus).