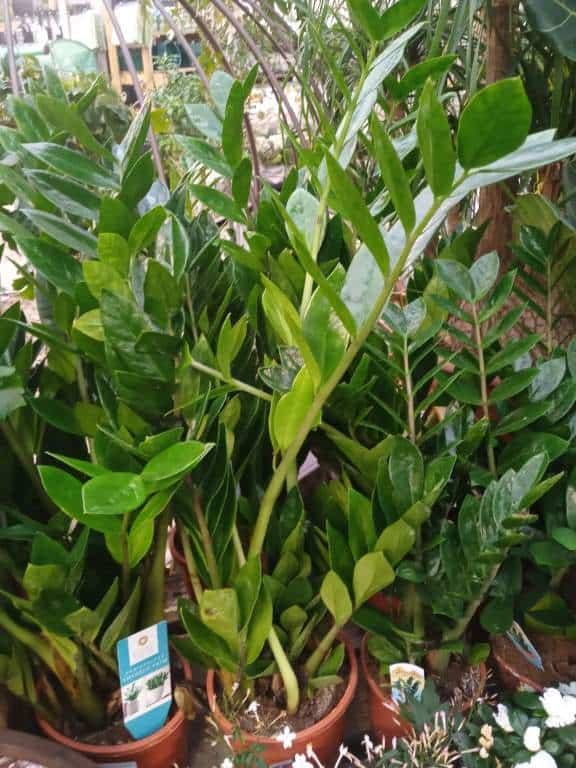 The reason for a dying ZZ plant is usually because of root rot due to overwatering and slow draining soils. ZZ plants are drought resistant and require the top 2 inches of soil to dry out between bouts of watering. If the soil is consistently damp the ZZ plant’s bulbs rot which causes the leaves to turn yellow and die.

ZZ plants need bright, indirect to thrive and should be turned occasionally to maintain even growth as they can grow leggy with a drooping appearance if they do have enough light.

If the ZZ plants leaves are turning brown, this is usually because they are exposed to temperatures cooler then 55°F (12°C) or they are in too much direct sunlight.

The ZZ plant is native to East Africa with a significant swathe of its native territory lies in the seasonally arid regions of Kenya. Therefore the ZZ plant has several significant adaptions to tolerating drought like conditions, similar to succulents such as aloe vera.

These include waxy, relatively small leaves with aim to reduce the surface area for transpiration (water loss) in arid climates and high temperatures and fleshy rhizomes that store water.

The branches are also relatively thick and fleshy as they are used for storing moisture reserves as a survival strategy during times of drought.

As ZZ plants have significant adaptions for dry conditions, the ZZ plant is particularly sensitive to overwatering, damp soils without a poor structure and any standing water in saucers and trays underneath the pot which keeps the potting intolerably damp for the ZZ plant to survive.

Damp soil causes the ZZ plant’s rhizomes to rot and prevents the roots from uptaking nutrients and moisture (due to decreased root respiration) which turns the leaves yellow.

The ZZ plant is particularly vulnerable to the affects of overwatering in Winter as the plants goes into a state of dormancy due to fewer hours of daylight and therefore requires watering much less often, compared to most houseplants.

How to Save a Yellowing ZZ Plant

The key to saving a yellowing ZZ plant is to recreate some of the conditions of its native environment by letting the soil dry before watering, decreasing watering frequency in Winter, and ensuring the ZZ plant is planted in well draining potting soil.

Once the soil has had a chance to dry out properly, the roots can respire more efficiently and the ZZ plant can recover. However if the soil has boggy for too long then the roots and rhizomes are more likely to be rotting and the ZZ is unlikely to revive.

ZZ plants are adapted to growing under the cover of other vegetation, so it can scorch in bright direct light and prefers indirect light.

Whilst ZZ plants are shade tolerant and the leaves can even still stay green in lower light, they grow best in brighter, yet indirect light rather then deep shade.

In deep shade ZZ plants grow leggy and droop as they search for more light to meet the plants energy requirements.

In too much shade the ZZ plant redirects its energy into growth to find light as a survival strategy which often causes the branches to weaken and droop.

Even in brighter conditions, if the ZZ plant is stays in the same position then the branches can grow towards the light if the plant is not turned regularly to ensure even exposure to light.

Once the branches have weakened a drooped significantly, these individual branches typically do not stand up again and recover their appearance.

However if the ZZ plant’s branches are just leaning or turning leggy then move the ZZ plant to an area of bright indirect light and turn the plant around by 1/4 every week or so, to ensure even exposure to light and more even growth.

Revive ZZ Plants that are not Growing?

ZZ plants are naturally very slow growers even if their conditions are optimal and all their growing requirements are finely tuned to thrive.

Its slow growth rate is because the ZZ plant grows in arid, unpredictable climates with often significant drought conditions for months. In fact ZZ plants have been neglected for 4 months without watering and have not suffered any significant adverse affects.

Slow growth is a way of conserving water in dry climates so that the ZZ plant can thrive in habitats where most plants would struggle.

The ZZ plant also goes into a state of dormancy during Winter in response to lower temperatures and fewer hours of light, in which it does not grow significantly.

ZZ plants are such slow growers that there are studies into how to increase the growth rate of propagated ZZ plants for commercial growers in order to meet consumer demand properly.

To increase the rate of growth of your ZZ plant, locate the plant in a room with bright, indirect light and use an all purpose houseplant fertilizer at half strength during the Spring and Summer.

ZZ plants are native to warm tropical climates and live in a mild to warm temperature range all year round, and therefore does not tolerate cold temperatures which result in the leaves turning brown.

Indoors the ZZ plant’s preferred temperature range is 75°F to 85°F however it can easily tolerate temperatures outside of this range without adverse affects such as brown leaves.

When locating your ZZ plant be conscious of draughts and try avoid contact between the leaves and the cold glass of windows which can be much cooler then the ambient temperature of a room at night.

Once the the ZZ plant is moved it should recover. The brown leaves may drop off however, but there should be new growth in the Spring if the conditions are good.

The leaves can also scorch brown due to too much direct sunlight.

ZZ plants grow under a canopy in dry woodlands in Africa, where they are sheltered from harsh sunlight. Move the ZZ plant to an area of bright indirect light so it can recover.

The scorched leaves do not return to a healthy green again, so wait until you see new growth in the Spring and cut back any brown leaves for aesthetic purposes.