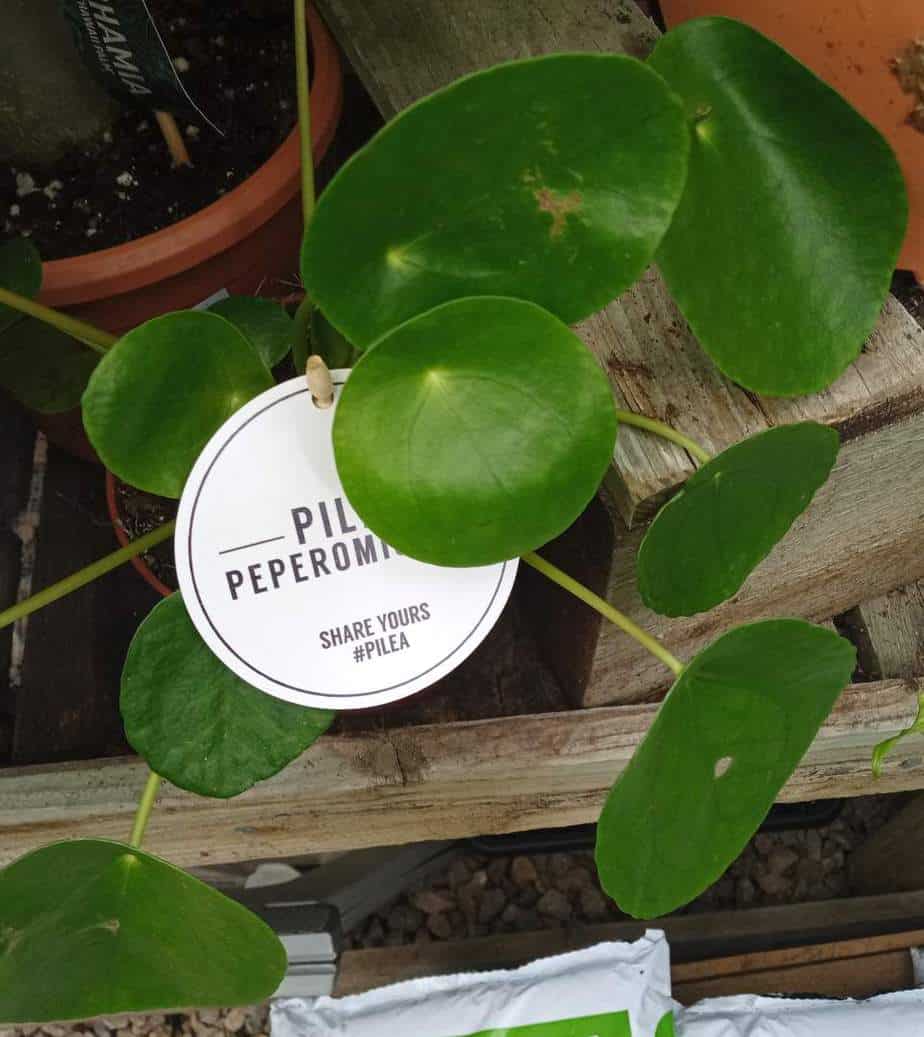 The most common reason for pilea peperomioides dying is because of overwatering. Pilea peperomioides requires the top inch of the potting medium to dry out between bouts of watering. If the soil is consistently damp the pilea leaves can turn yellow and brown with a drooping, dying appearance, caused by root rot.

Pilea plants can be sensitive to a range of environmental factors which can cause a drooping or dying appearance.

To revive dying pilea peperomioides it is important to replicate the conditions of the pilea’s native environment by planting pilea in well draining potting soil, watering only when the top inch of the soil is dry, mist the leaves to increase humidity and place the pilea in an area of bright, indirect light.

Here is a reference table with the most common reasons and symptoms of dying pilea peperomioides (also known as Chinese money plant):

The reason for a drooping pilea is because of low levels of light. Pilea plants grow best when in bright, indirect sunlight. If the pilea is in too much shade, then the stems grow longer and weaker as the leaves look for a stronger source of light which causes a drooping appearance.

Pilea plants grow naturally in rocky limestone outcrops on hillsides in temperate climates in China, where they are protected from direct sunlight but experience bright, indirect light.

The light indoors can be too low for the pilea, particularly if they are in a room with a north facing window and lots of dark surfaces.

A lack of light causes the pilea to put its energy into growing its stems as a priority in order to look for more light. The stems then become leggy and weak causing the pilea’s stems and leaves to droop.

Pilea peperomioides can also droop over, specifically on one side more then the other if they are not turned regularly, so that the whole plants has an even amount of light.

Another cause of drooping pilea plants is due to dry soil.

Pilea plants are often sold as small plants which may be in smaller pots. A very small pot has less capacity for soil and therefore can hold much less moisture and dries out much quicker.

If the soil dries out completely then the pilea droops as a sign of stress.

Consider whether your pilea is near a source of heat which can contribute to the soil drying too fast or in an air current which can sap moisture from the leaves (pilea’s prefer some humidity).

Pilea peperomioides also naturally grow into a leggy plant over time. The aesthetic, Instagram worthy appearance may only last a 2 years or so before the lower leaves start dying back and as the plant grows larger the overall appearance tends to be drooping.

This is also the timeline of growth as a wild plant in terms of developing a drooping appearance over time.

How to Revive a Drooping and Dying Pilea Peperomioides

If the plant is mature and has a drooping appearance due to the age of the plant then it can be difficult to revive to it original appearance, although I would still recommend rotating the plant often a and locating in a bright room.

Pilea are often called the ‘friendship plant’ as they often grow offshoots which propagate very easily. This can provide a new pilea plant which has a non drooping appearance.

Watch this helpful YouTube video for how to propagate pilea offshoots for new plants:

The reason for pilea leaves turning yellow is usually because of root rot due to too much water around the roots. Pilea peperomioides has adapted to growing in gritty soils and require well draining conditions. If the soil is too compacted or too damp then the leaves turn yellow with a dying appearance.

However its should be noted that the lower leaves and stems of the pilea turn yellow and withered as the plant matures.

This is an entirely natural process and does not necessarily indicate there is any stress to your plant, particularly if the rest of the leaves look healthy and green.

Pilea leaves can also turn yellow if they are in a dimly lit room. Pilea prefer bright, indirect light which promotes even growth and dark green, healthy looking leaves.

If the pilea is in a very shaded location (such as a room with a North facing window) then the stems can grow leggy and the leaves turn pale as they look for a stronger source of light.

Probably the most common cause of pilea peperomioides leaves turn yellow and brown is because the soil is too damp which can be as a result of:

Pileas are adapted to growing in rocky or gritty soils that have a porous, aerated structure which allows excess water to drain away from the roots efficiently after rainfall.

If the potting medium is too compacted or it does not draining efficiently, they this can exclude oxygen from around the roots which prevents root respiration.

If the roots cannot respire then this interferes with their ability to draw up the moisture and nutrients that the pilea requires which results in the leaves turning yellow with a dying appearance.

How to Revive a Dying Pilea Peperomioides with Yellow Leaves

Recreating the well draining soil conditions with gritty potting soil and watering when the top inch feels dry provides the pilea with the conditions it requires to revive.

However if the pilea has been in damp soil or sat in water for too long then it has likely developed root rot at which point it can be very difficult to save.

Pileas that have turn yellow and grow leggy due to not enough sunlight can somewhat revive once they are moved to a brighter spot.

Cut away any yellowing, leggy leaves or stems that do not recover to help stimulate new growth. If the whole plant remains alive but leggy then I would recommend propagating your pilea from healthy growth.

Most often the reason for pilea peperomioides leaves curling is because the soil is too damp from overwatering. Pilea plants require the top inch of the soil to dry out between bouts of watering. If the pilea’s leaves curl inwards, this indicates stress due to damp potting soil and overwatering.

However pilea peperomioides leaves can also curl and droop as a reaction to overly dry conditions.

Pileas grow in well draining gritty soils, so they can tolerate periods of drought between watering, but if the humidity is too low, then this can sap moisture from the leaves.

High temperatures and too much sun also increase evaporation and water loss from the leaves which contributes to the leaves curling appearance.

It is also important to water pilea thoroughly each time you water, so that excess water trickles from the base of the pot. If you water too lightly then only the top inch or so of the potting medium becomes moist and the water does not reach the roots where it is required.

The reason pilea leaves curl up in response to dry soil and dry air is to reduce the surface area of the leaves. If the leaves have a reduced surface area this helps to conserve moisture as it lowers the the amount of water loss from the leaves.

How to Revive Dying Pilea Peperomioides with Curling Leaves

To revive curling pilea peperomioides leaves, its is important to replicate the conditions of the pilea’s natural environment with a temperature range of between 65° to 85°F, high humidity and to water the pilea around once a week, then allow the top inch of the soil to dry before watering again.

If the cause of your curling pilea leaves is overwatering and damp potting soil then the pilea should revive gradually over the weeks as long as the soil can dry put somewhat between bouts of watering. This restores the natural balance of moisture and drainage for the pilea to thrive.

If the cause of the curling leaves if due to dry conditions then I recommend you implement regular misting of the leaves, a cooler environment (still above 65°F or 18°C) and keep the pilea away from direct sunlight and away from drying air currents.

The pilea should start to recover well from drought stress after a good soak.

Why is My Pilea Peperomioides Not Growing?

The reason for pilea peperomioides not growing is usually because the potting soil is too compacted for the roots to grow properly. Pilea plants require aerated soil to establish. If the soil is too dense then the pilea’s root system cannot establish and access moisture and nutrients they require to grow properly.

Pilea grow in porous, well draining, gritty soil in their native environment. This allows water to drain efficiently and space for sufficient oxygen for root respiration so that the plant can grow properly.

The solution for a pilea that is not growing well is to replicate the soil in the pilea’s native environment by amending it with 1/3 horticultural grit, succulent and cacti soil or orchid potting medium.

All these options help to improve the structure of the potting soil so that it is more favorable for pilea peperomioides to grow well.

I would also recommend repotting the pilea to a pot the next size up, in case pot bound roots are limiting the pilea’s growth.

It is also best practice to use a regular houseplant fertilizer at half strength, every 4 weeks in the Spring and Summer which can help stimulate growth, particularly if the pilea as been in the same pot for a long time or the potting soil is especially poor in nutrients.