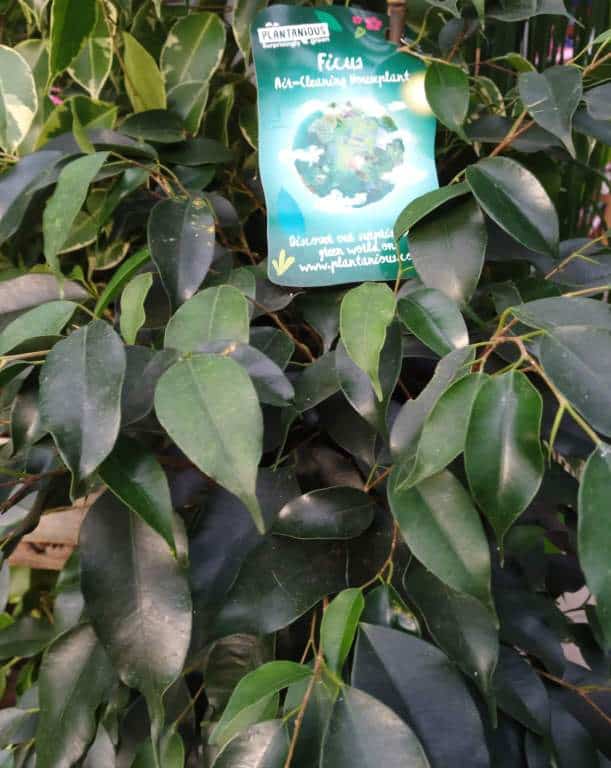 A dying ficus plant is usually because of underwatering, overwatering or a sudden change in temperature. If the leaves are turning yellow and dropping off in Winter, this is a normal seasonal cycle and does not mean your ficus is dying.

Here are some of the most common symptoms and causes of dying ficus plants:

To revive your dying ficus, replicate some of the conditions of its native environment with higher humidity, a temperature range of between 65ºF to 75ºF (18ºC to 24ºC), bright indirect light and only water when the top inch of soil feels slightly dry.

Ficus plants are extraordinarily sensitive to any change to their environment and drop their leaves at the first sign of stress which can be for a variety of reasons.

Usually the reason for a ficus dropping its leaves is because of overwatering or a sudden fluctuation in temperature. Ficus plants need well draining soil and prefer a consistent temperature range of 65ºF to 75ºF (18ºC to 24ºC). If the temperature changes suddenly or the soil is too damp, the ficus drops its leaves.

However it should be noted that the leaves of ficus plants such as ficus benjamina and ficus lyrata (fiddle leaf fig) often turn yellow and drop their leaves in Winter in response to lower levels of light and cooler temperatures. This is a normal part of the life cycle of ficus plants when grown indoors and is not a serious cause for concern.

The leaves regrow in Spring when the hours of daylight increase.

Ficus plants also prefer bright indirect light. Too much sun can cause the leaves to turn brown or drop off whereas with too little light, the ficus does not have the energy to support the leaves, which causes them to drop off.

Ficus’s prefer a balance of a well draining potting mix that dries slightly between each bout of watering.

If the soil stays damp consistently or is perhaps overly compacted then this can exclude oxygen from around the ficus’s roots which interferes with the roots ability to draw up nutrients and moisture. If the roots cannot draw up moisture and nutrients the leaves turn yellow and fall off.

Too much moisture around the roots, resulting in dropping leaves can be caused by:

If the ficus is water too lightly or not often enough it can also loose its leaves. A common problem is that the soil has been allowed to dry out to such an extent that the soil becomes hydrophobic and repels water off the surface of the soil, without infiltrating and reaching the roots where it is required.

Leaves Dropping After Repotting or Moving the Ficus

Ficus plants are so fastidious about the consistency of their conditions that they can even drop their leaves after repotting or just being moved to a different spot in the house.

Even if the conditions are all within the favorable range for ficus plants including humidity, temperature etc. the leaves can drop due to the contrast of conditions.

Sometimes a change in the potting soil after repotting can also be responsible if the new potting soil retains moisture for longer then the ficus is used to.

Larger pots also contain more soil and therefore dry out more slowly, so avoid repotting to a much larger pot and use a pot that is just one size up.

How to Revive a Ficus That is Dropping Leaves

To revive a ficus with falling leaves it is important to recreate the conditions of its native environment with high humidity, temperatures between 65ºF to 75ºF (18ºC to 24ºC), bright indirect light and watering when the top inch of the soil has dried. New leaves can emerge in the Spring.

With the preferred conditions, the ficus should be able to recover and regrow its leaves in the Spring and Summer in response to more hours of bright light.

Consistency is key for ficus plants so avoid moving, repotting or changing the environment in anyway (creating air currents from air conditioning or open windows for example) whilst the ficus is regrowing leaves.

If the roots have been in damp soil for too long or it has been exposed to extreme cold, the ficus is unlikely to recover.

In my experience, ficus growers keep their indoor ficuses in the same pot, and in the same place for a long time to avoid disrupting the notoriously sensitive ficus which is a sensible precaution.

However if they are in the same pot for a very long time, the roots can completely exhaust the potting soil of available nutrients which results in drooping, yellowing ficus leaves with poor growth.

It is also worth scratching some soil back to check if the roots are pot bound, in which case the ficus may also be struggling with a lack of moisture in the soil, which can compound the problem of yellowing leaves.

All ficus houseplant tend to grow best in bright indirect light. If they are in direct sunlight, particularly in Summer, the leaves can scorch yellow.

Temperatures below the optimal range can contribute to yellowing leaves…

Ficus plants are native to tropical South Asia and prefer warm and consistent temperatures of 65ºF to 75ºF (18ºC to 24ºC) and around 10ºF cooler at night as this replicates the natural cycle of temperatures in their natural environment.

If your house is on the cooler side of these temperatures, then the ficus leaves can start to turn yellow as a sign of stress.

If temperatures decrease suddenly then the ficus is more likely to drop its leaves entirely.

Ficus plants are particularly sensitive to too much moisture around the roots due to overwatering or slow draining soils. If the first inch of soil does not have a chance to dry between watering this can cause root rot which causes the ficus’s leaves to turn yellow.

Ficus plants need porous aerated potting soil (typically amended with some grit or perlite) to allow for oxygen to reach the roots so they can respire.

If the soil is constantly saturated, then the water can exude oxygen from the soil which prevents root respiration. If the ficus roots cannot respire then they are unable to draw up moisture or nutrients to transport around the plant, which results int the leaves turning yellow and eventually dropping off.

Too much moisture around the roots can be cause by overwatering, slow draining soils or saucers, trays and decorative outer pots that cause water to pool around the base of the ficus’s pot which keeps the soil consistently boggy.

How to Revive a Dying Ficus with Yellow Leaves

Reviving ficus plants with yellowing leaves due to low nutrient soil, small pots and too much sun…

If it is Winter, wait until Spring to repot as this is the time of year the ficus is more resilient to a change in conditions.

Scorched yellow leaves do not recover, but yellowing leaves due to a nutrient deficit can revive their appearance. Due to the ficus’s sensitivity the ficus is likely to loose some leaves after any intervention that results in even a slight change to its environment.

As long as you follow the best practices of care for ficus plants with the right balance of light, watering and temperature the ficus can regrow its leaves in the following Spring and Summer.

How to revive yellowing ficus leaves due to temperature stress…

Once the ficus’s leaves turn yellow they do not typically turn green again and usually drop off, even if you have addressed the environmental problem that caused the leaves to turn yellow in the first place.

However, given more favorable conditions the ficus should be able to recover and regrow new, healthy green leaves in the Spring and Summer, when the plant is actively growing.

The reason for ficus leaves turning brown is usually because the leaves are losing too much water due to dry indoor sapping moisture from the leaves causing them to turn brown and crispy. A lack of water at the roots due to underwatering and overly dry water resistant soil can cause drought resulting in brown leaves.

Ficus are subtropical plants that prefer around 40% humidity, whereas the air indoors is typically around 10% and can fluctuate due to indoor heating, air condition and even draughts from opening and closing doors or windows.

The discrepancy between preferred humidity and indoor dry air usually results in the leaf edges turn brown, dry and crispy.

Prolonged exposure to low humidity or perhaps if you live in a particularly arid climates (such as Arizona) usually causes the leaves to fall off as the ficus is losing too much moisture from the leaves.

The solution is to:

Sometimes people make the mistake of watering their ficus plants with the right frequency, but they do not use enough water, which means the the moisture does not infiltrate all the soil and reach the ficus’s roots where it required.

If there has been too long between each bout of watering the soil can dry out too much and become hydrophobic, which means it repels water off the surface of the soil and down the side of pot without infiltrating the soil and reaching the roots.

You can often tell if the soil is hydrophobic if you scratch back some of the soil after watering and the underlying soil is still dry.

The resulting drought causes the ficus’s leaves to turn brown and drop off.

The solution is to:

Once the soil has had a good soak in a basin, the structure of the soil should improve, so that the water can more readily infiltrate properly, the next time you water your ficus.

(Read my article, How to Revive a Dying Fiddle Leaf Fig).