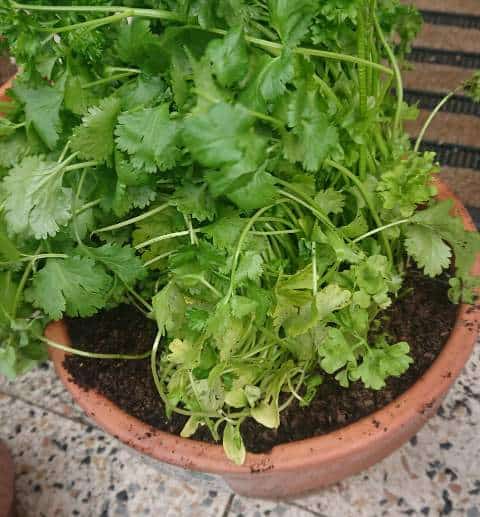 Cilantro (also known as coriander) is an annual leafy herb that is relatively easy to grow once you have recreated its preferred growing conditions.

The reason for a dying cilantro plant is commonly drought due to too much sun, not watering frequently enough and fast draining soil. Over watering, too much nitrogen fertilizer or pots without drainage can cause cilantro to droop and the leaves to turn yellow with a dying appearance.

Cilantro is an annual herb that dies back after flowering so it is important to prune your cilantro regularly to prevent flowering to increase the cilantro’s longevity and promote the production of fresh leaves.

To revive a dying cilantro it is important to provide the plant with its preferred growing conditions such as partial sun (morning sun followed by afternoon shade is ideal), frequent watering, good quality compost, planting in pots or containers that have drainage holes in the base and regular pruning.

Cilantro Wilting (Drought and Too Much Sun)

The most common reasons for cilantro wilting is that they are not being watered enough or they are temporarily wilting on the hottest days.

Cilantro has abundant leaves with a good surface area, therefore they tend to lose a lot of moisture through their leaves on hot or windy days (transpiration).

To remain healthy and prevent wilting cilantro requires the soil to be consistently moist so that the roots can draw up water at a faster rate then it is lost through their leaves.

If the soil or potting mix is sandy, stony or particularly fast draining then cilantro tends to wilt as the roots struggle to draw water up.

It should be noted that cilantro does wilt on hot days temporarily as a method for conserving moisture and perks up later in the evening with cooler temperatures. This is simply an adaptation to heat and the cilantro may not be dying.

How to Revive a Wilting Cilantro Plant

If your cilantro is wilting it can be easily saved. Here are the steps to reviving wilted cilantro:

The most important step is to keep watering your cilantro regularly so that the soil is moist. With the optimal soil profile (lots of compost) and a large enough pot your cilantro it should revive from a wilted appearance as quickly as day or so if the cause is dehydration.

If you have bought cilantro from a store or garden center or grown it from seed indoors then the plant often droops and looks like it requires reviving after transplanting outdoors.

When the plant is grown commercially for sale it is cultivated in the optimal conditions often in a green house with full sun, specific temperature, watering and soil conditions.

The cilantro is then accustomed to a specific set of conditions and suffers from shock due to a contrast in temperature, watering and soil conditions when it is planted in your garden.

This shock is often temporary as the root systems establishes in the new soil and the plant becomes more accustomed to its surroundings.

As long as the cilantro is planted in 6 hours of sun, in good quality compost and watered regularly then it should revive after it has adapted to the conditions of your garden.

It is essential the soil is watered so that it is consistently moist whilst the plant establishes as cilantro can lose a lot of water through its large leaves to help mitigate the shock.

If the cilantro is already quite leggy when you bought it I recommend pruning it should to around 8 inches as longer stems can be due to higher levels of nitrogen in the soil which causes them to weaken and increases the risk of drooping.

Pruning should reduce the stress on the cilantro and stimulate new growth.

If your cilantro stems are all falling over under their own weight then this can be due to several reasons:

Assuming that the cilantro isn’t wilting due to a lack of watering, Cilantro can also have a falling over appearance after planting due to transplant shock or because of a lack of sun or perhaps too much sun and high temperatures.

How to Revive Cilantro That is Falling Over

The key to reviving cilantro that has fallen over is to recreate their optimal growing conditions and prune regularly.

Prune back any leggy growth that is greater then 8 inches tall and provide the best conditions for your lopsided cilantro and it should show signs of recovery after a week.

Here is a helpful YouTube video for a visual guide to pruning cilantro:

If cilantro turns yellow (or brown) often this is a sign of stress because of a lack of sun, over watering causing root rot or as a result of too much nitrogen due to fertilizers or not enough nutrients in the soil.

Cilantro prefers full sun in cooler climates or morning sun followed by afternoon shade in hot climates. If the cilantro is in too much shade then the growth is sparse and leggy as the it looks for more light and the leaves can turn yellow.

Over watering or slow draining soil can also result in yellow leaves. Cilantro requires the soil profile to be retain moisture yet drain well so the roots are not sat in saturated soil as this causes root rot.

If fertilizer is applied in too high concentration then the cilantro can droop and turn yellow due to excess nitrogen in the soil.

In good soil or potting mix cilantro does not necessarily require additional fertilizer for lots of growth.

Conversely if the cilantro is in sandy soil (which is low in nutrients or in a small pot and the roots are pot bound the there may be a nutrient deficit in the soil which causes a yellowing of the leaves as a sign if stress.

How to Revive Cilantro with Yellow Leaves

Cilantro can often be revived even if the leaves are yellow if you change the conditions to suit the plant.

Once you have corrected any environmental conditions that may have caused your cilantro to turn yellow then trim away any yellowing leaves and trim the whole plant back so that it is no taller then 8 inches to stimulate new growth.

Discard the yellow leaves as their flavour is impaired and not recommended for culinary use.

If you have successfully recreated the optimal growing conditions for cilantro then it should revive and produce new green growth that has much better flavour and aroma.

If the cilantro has been in saturated soil for too long then it is difficult to revive and it I would recommended sowing more seeds or buying a cilantro to plant in a pot with new soil.

Cilantro is an annual herb so its objective is to grow and flower then produce seeds for next year. After cilantro flowers, the plant dies back and the flavour of the leaves is inferior to new growth.

The key to increasing the longevity of your cilantro is to prune it regualrly.

Pruning the plant once the stems exceed 8 inches stops the plant from developing flowers.

Typically pruning once every 2 or 3 weeks in the Summer keeps the plant at its most productive and providing lots of new leaves throughout the year until the temperature drops in Fall or Winter.

After the cilantro has flowered there is not much you can do to revive the stem that is supporting the flowers but you should treat each stem individually. If one stem of cilantro has gone to flower the other can be saved.

Regularly prune the other stems back down to about 8 inches to keep stimulating new growth and preventing them from flowering and then dying back.

link to How to Water Petunias

Continue Reading
link to How to Revive Dying Petunias

Petunias are tender annual flowering plants that do not tolerate frost or cold temperatures and die back in Winter. Dying and wilting petunias are usually because of fungal diseases such as root...