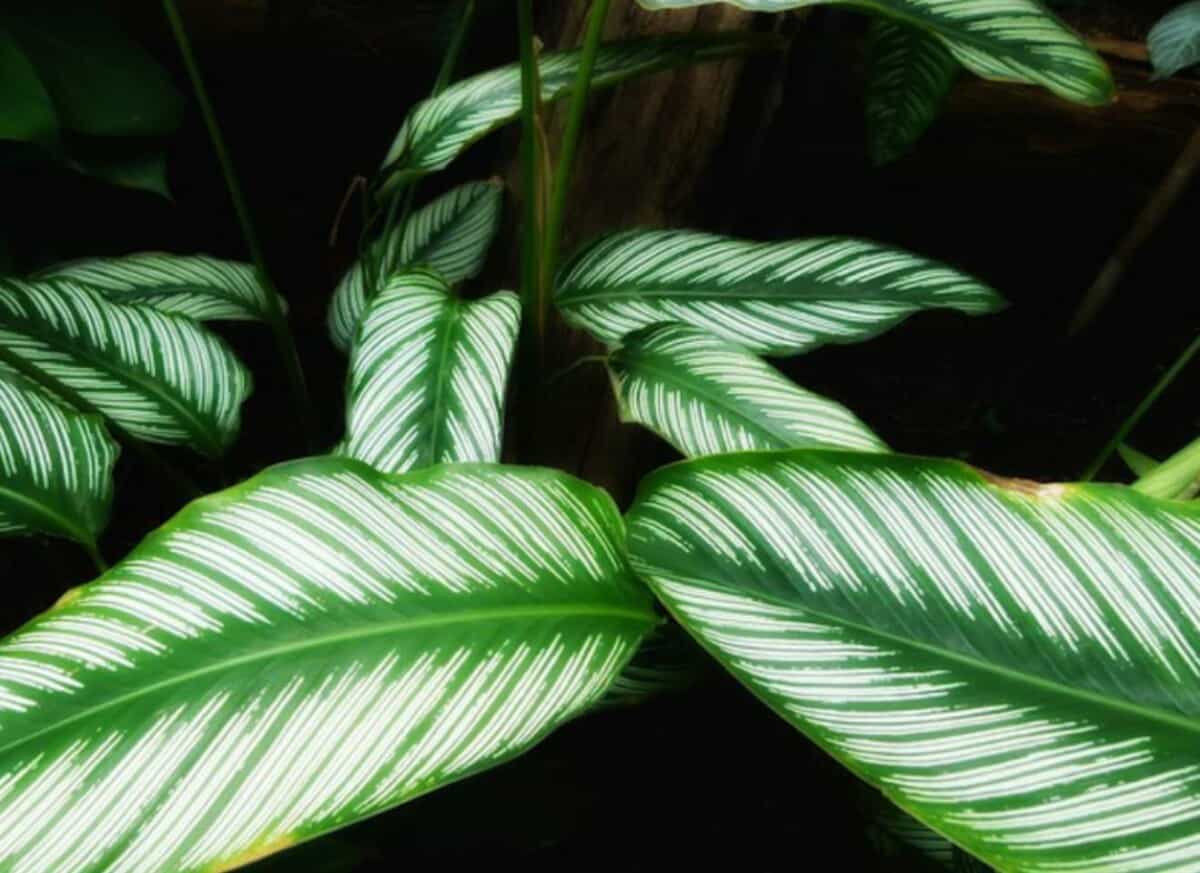 The reason for a dying calathea is usually because the soil is dry around the root ball due to not watering often enough or watering too lightly which causes the leaves to droop and turn brown and crispy with a dying appearance.

Low humidity saps moisture from the calathea’s leaves and causes the margins to turn brown and crispy cause them to die back.

To revive calathea plants it is important to recreate the growing conditions in their native rainforest tropical habitat with high humidity, consistently moist, yet well draining soil and locate calathea in bright, indirect light, with warm temperatures away from full sun.

Calathea (also known as a ‘prayer plant’) is a native of the South American rainforest where it thrives in hot and humid conditions with soil that stays consistently moist due to frequent rainfall.

Houses tend to have low humidity at the best of times but for the calathea, which is adapted to higher humidity, this can cause signs of stress very quickly with brown tips to the leaves. This is often exacerbated by the affects of air currents from air conditioning in Summer and sources of heat in Winter.

The potting soil of the calathea should stay consistently moist (but not saturated) to emulate the moist soil conditions of its native environment.

If the soil is allowed to dry out between bouts of watering then the calathea typically droops and turns brown at the leaf margins, with severe drought stress causing the leaves to turn brown entirely and the plant to die back.

A common mistake is to water the calathea too lightly which only moistens the top inch or so of the soil.

This means that water does not infiltrate the soil properly and the roots at the bottom of the pot cannot access the moisture they require causing the plant to die back.

Calathea also grow under a canopy and grow well in filtered light or bright, indirect light rather then full sun.

Too much direct sunlight can causes the calathea leaves to fade, scorch and contributes to the drying affect that causes the leaves to turn brown and die back.

How to Revive a Dying Calathea with Drooping, Brown Cripsy Leaves

Once you have adjusted the conditions and practices of care for your calathea plant so that they replicate the conditions in its native habitat, the calathea can start to recover.

How quickly the calathea leaves recover depends on the severity of the drought stress but generally there should be signs of improvement over the course of the next few weeks.

For leaves that have turned completely brown, cut them back to the stem as they often do not recover. This helps to stimulate the growth of new leaves.

Calathea Leaves Turning Yellow or Brown and a Dying Appearance

Rather confusingly a lot of the symptoms of over watering are superficially similar to under watering with brown or yellow leaves and a drooping appearance.

Whilst calathea is a rainforest plant, it does not tolerate the roots being in saturated soil as this excludes oxygen entirely from the soil which is require for root respiration which interferes with the roots ability to uptake water and nutrients.

This can surprisingly give the calathea the appearance of an under watered plant, whereas more water may be compounding the problem. If the calathea is in standing water for too long this promotes the conditions for root rot which can kill the plant.

Too much water around the roots is often caused by pots without proper drainage holes in the base or because of the use of saucers, trays and decorative outer pots that prevent excess water from spilling in the home.

These factors prevent water from escaping from the pot and the roots are sat in boggy soil.

A range of symptoms can occur depending on how long the roots have been in overly damp soil, but the easiest way to distinguish between unhealthy plants that are under water or over watered is by feeling the soil through the drainage hole in the base.

If the soil feels somewhat dry then under watering is most likely the problem. If the soil is damp the over watering is the cause of your dying calathea. Bear in mind that low humidity can also cause these symptoms.

Applying fertilizer too often or in too high concentration can also turn the leaves yellow.

Once the calathea has been moved to a more suitable potting profile with well draining soil, and pots with effective drainage then the calathea can recover, although recovery is usually slow.

Wait till you see signs of new growth and emerging leaves. Some of the leaves that have turned brown or yellow are unlikely to recover and you can cut them back at the base when new growth emerges.

However if calathea has been sat in damp soil for long then it has likely developed root rot which is more likely to kill the plant, which highlights the importance of good drainage.

Calathea are tropical plants that live in the rainforest in Brazil, with consistently warm temperatures.

The calathea adaptations to a consistently warm environment, means that they can be very sensitive to cool temperatures which can cause the leaves to curl or a general loss of vitality in the plant with brown foliage, drooping leaves or a dying appearance.

It is important to acknowledge that calathea do curl inwards every night (hence their common name prayer plant) as this is an adaptation to maximizing the leaves exposure to the sun throughout the day. This is perfectly normal, and not any side affects from adverse conditions.

The optimal temperature range for a calathea plant is 65 to 75 degrees F (18°C- 23°C) and calathea leaves can show signs of stress when exposed to temperatures cooler then 60°F (15°C).

Temperatures are fairly consistent in their habitat so calathea can show signs of stress due to temperature fluctuations in the home.

Due to their sensitivity to cold temperatures keep calathea out of the way of air currents from air conditioning, draughts, forced air and sources of heat.

Also be aware that if your calathea is on a window sill the leaves can make contact with the window which can be considerably cooler then the rest of the house and damage the leaves of the calathea.

Keep your calathea in a more stable temperature environment in bright, indirect light and the plant should show signs of recovery within a few days.

As calathea has adapted to growing under the canopy of a rainforest it does not tolerate direct sunlight very well which results in a scorched appearance.

Leaves can fade or even turn a scorched yellow or brown when it has direct, intense sunshine.

Calathea leaves generally look their best when the plant is located in bright indirect sunlight as this ensures the plant has enough light for their interesting variegated patterns yet prevents and adverse affects.

Once the leaves have been sun burnt they do not recover in appearance, however the remaining damage to the leaf does not necessarily kill the plant.

Prune back any sun burnt leaves for aesthetic reasons back to the base to tidy the appearance. However if many leaves and sun burnt badly then relocate the plant to a location with indirect light and wait for new growth to emerge before cutting back a significant number of leaves.

The calathea may take some time to recover but with patience the plants appearance can improve during the Spring and Summer months and the plant can revive.