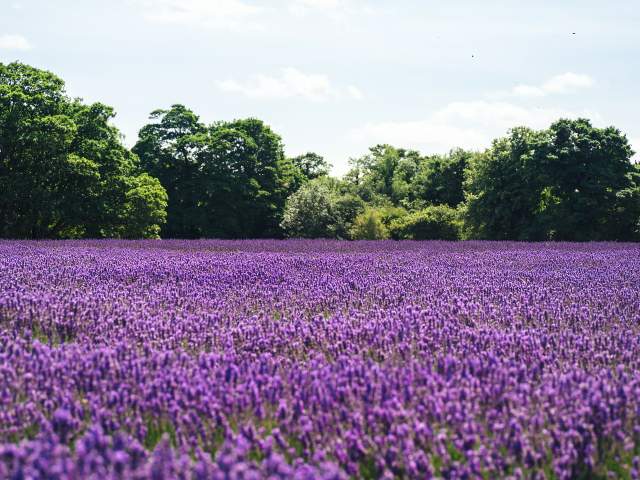 Lavenders are perennial sub shrubs that are great for forming aromatic decorative hedges, plants and borders around the garden. However you may be concerned that they will spread in your garden in the same way other herbs are known to…

Lavenders can spread in terms of vegetative growth, with the largest varieties reaching 36-40 inches (90 – 100 cm). Lavenders can spread by seed dispersal but the rate of germination is low and almost negligible. You can prevent lavender from spreading by trimming off seed bearing flower heads in late summer.

Lavenders do not spread by division, self propagation or any other method apart from seeds dispersed from pods developed in their spent flower heads in late summer. (Although they are easily propagated with cuttings by gardeners).

The seeds require very specific conditions to germinate therefore, lavenders will not pop up unexpectedly in random parts of your garden in the same way that other herbs are known to do.

Different varieties of lavender grow to different sizes and the amount of growth is influenced by how well they are cared for and pruned each year.

How Much do Lavenders Spread?

How much a lavender will spread in terms of vegetation growth and size will vary significantly by variety and whether they are receiving optimal care, primarily in terms of sunlight, soil condition and regular pruning.

All Lavenders grow to roughly the to the same height as their width. This of course depends on how well they plant is cared for and how much space it has to grow.

The amount of sunlight in particular is a big determining factor to size, health and the strength of the blooms each summer and pruning is necessary to extend the life of the lavender and maintain shape.

Lavenders that are not pruned regularly will become leggy, produce less blooms and be more vulnerable to weather damage.

(If you lavender is not blooming read my article for the solution).

Lavenders require at least 6 hours of sun per day but the more sun they receive the better for blooms.

Of course, how far each lavender spreads in terms of growth should determine how far apart you should plant your lavenders.

Lavenders grow best with around 2-3 feet of distance from one another. Lavenders should be spaced appropriately so that they enjoy a breeze (which helps reduce fungal disease) and so that they receive enough light throughout the day without shadowing one another.

Spacing them apart also means there is less competition between plants in terms of space for their root systems, access to water and nutrients.

It is best practice to prune your lavenders into a mound shape once in the early spring and again at the end of summer to cut back spent flower stems. This will help maintain an attractive shape, limit the weaker woody growth and stop lavenders from spreading or becoming misshapen.

How to Avoid Lavenders Spreading by Seed

Lavenders can spread by foliage growth (as with all plants) and seed dispersal in the late summer.

Lavender plants do not spread by self propagation, or any other mechanism (however they are reasonable easy to propagate with some planning). They can be physically divided, but this has a much lower success rate then taking cuttings to propagate.

This is a big advantage in terms of controlling the spread of lavender as all the seeds are contained in one seed pod and therefore much easier to control just by deadheading the flowers before the seeds fully develop.

Even if you let the lavender go to seed it is very unlikely to self set. Herbs like oregano are notorious for self seeding but lavender seeds very rarely germinate from self seeding. In all my experience as a commercial gardener I haven’t seen lavender spread in this way, so it is not something you should worry about in your garden.

The process for gardeners to grow lavenders from seed requires several steps such as a period of cold followed by warm soil temperatures of around 75º to 80ºF (23.9º to 26.7ºC) and ideally they need to be heated from underneath the soil in their trays.

It is unlikely that the series of specific steps to grow lavenders from seed in the correct sequence would happen naturally in your garden.

There is also the fact that lavender hybrids are often seed sterile and the only way to produce more plants is through taking cuttings for propagation.

Controlling lavenders seed dispersal is very easy and rarely a problem for gardeners in all climates.