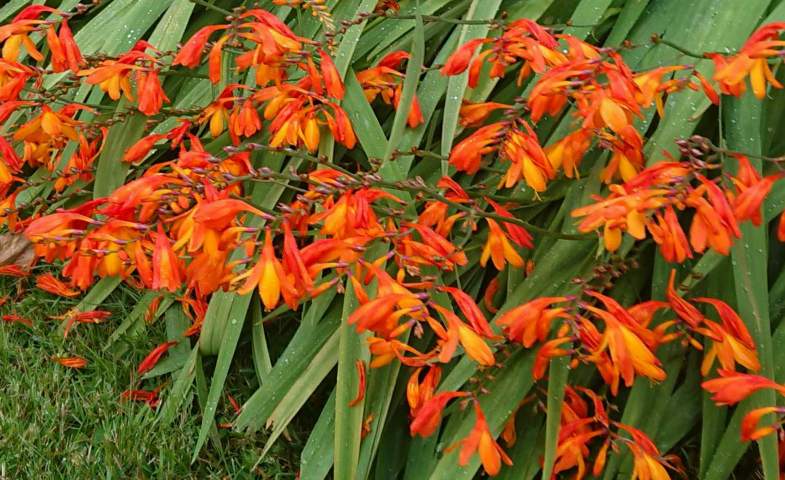 Crocosmia (also called Monbretia or Copper tips) is a perennial plant that flowers from around July until September with a good 8 weeks of blooms from established plants.

If your crocosmia is not flowering this is usually because of too much fertilizer, water stress or not enough sun. Additional fertilizer promotes excess foliage growth at the expense of flowers. Crocosmia also displays more flowers, the following year after planting.

Too Much Fertilizer (Foliage Growth at the Expense of Flowers)

Probably the most common reason for crocosmia not flowering in the Summer is because of the use of fertilizer.

The crocosmia in my garden (in this photo) have never had any additional fertilizer and flowering spectacularly year on year.

Additional fertilizer promotes foliage growth at the expense of flowers, which is why crocosmia can grow with lush, healthy foliage and few flowers.

Crocosmia is a hardy plant that grows in a variety of soils (as long as they are well draining) even flowering in nutrient poor rocky soils in their native South Africa.

Therefore significant applications of fertilizer is generally contrary to their preferred conditions as crocosmia are not heavy feeders in the same way roses are.

Rather then adding fertilizer is is far more effective to amend the planting area with compost, leaf mould or well rotted manure.

If your crocosmia is already planted (and it is therefore too difficult to amend the soil) then applications of mulch in the Spring ensures the soil is evenly moist and adds nutrients to the soil which creates the preferred conditions of crocosmia to bloom in the Summer.

Scale back any fertilizer of your crocosmia.

If you have already applied the fertilizer then it is unlikely your crocosmia will flower this season, however there should be abundant green foliage and the plant can still be perfectly healthy.

Crocosmia are very low maintenance plants that tend to do best when somewhat neglected. With some patience there is a greater prospect of crocosmia flowering the following year.

Too Much Shade (Flowers best in full shade or partial sun)

The amount of sunlight also has a significant influence as to whether crocosmia flower.

Whilst it is possible for crocosmia to flower in partial shade and even full shade, the blooms are far less pronounced then crocosmia plants in full sun even in the same garden.

To ensure the maximum amount of flowers, plant crocosmia in full sun.

Although in particularly hot climates (such as the Mediterranean or Southern California) the intense sun can limit the longevity of the flowers, so in hotter climates, crocosmia tend to flower for longer when planted in partial shade.

Also intense heat and dry soil could lead to water stress which can limit the flowering of crocosmia.

Crocosmia is generally not fussy in terms of soil preference as long as the soil is well draining, however in hotter climates I would recommend amending the soil with compost to help retain moisture to avoid drought.

With crocosmia that is already planted in hot climates, the addition of compost, leaf mould or well rotted manure can improve the moisture capacity of the soil so that the crocosmia can flower without the stress of drought.

Watering during the hottest weeks of the year can help to keep the crocosmia healthy so it has the resources it requires to display flowers.

Crocosmia May not Flower in First Year

Crocosmia does not necessarily display significant flowers in the first year after planting.

This is usually because of crocosmia taking time to adjust to their new conditions.

Consider that before you buy your crocosmia, it has been cultivated in a green house or nursery with controlled temperatures, soil, sun light, watering, humidity etc.

The crocosmia is then planted in your garden which may have some contrasting conditions to the conditions that the plant is originally accustomed to.

Crocosmia is not a difficult plant to grow however it may take a year or so to establish and adjust to its new conditions before it displays lots of flowers.

With patience your crocosmia should flower after the first year as long it is:

Regular dead heading of any faded blooms encourages new flowers during the season. The less fuss and attention you pay crocosmia the better it tends to flower.

The crocosmia in my garden have been flowering well for more then 10 years.

I personally have seen great success by not cutting back the leaves in the Fall and allowing the crocosmia leaves to turn brown to form a natural mulch which has allowed for a stronger display of flower each year.

However the leaves can look untidy in the Fall, so as an alternative, snip off the leaves as they naturally turn brown and use a compost mulch in the late fall.

This should help to insulate the bulbs from severe cold during Winter which contribute nutrients to the soil which gives the crocosmia a head start for growing and displaying flowers in the Spring.

link to How to Revive Dying Petunias

Petunias are tender annual flowering plants that do not tolerate frost or cold temperatures and die back in Winter. Dying and wilting petunias are because of fungal diseases such as root rot,...

Continue Reading
link to How to Water Mint Plants

Water mint plants twice a week with a thorough watering so that excess water trickles from the base of the pot or container. Mint plants require the soil to be evenly moist but not saturated to...