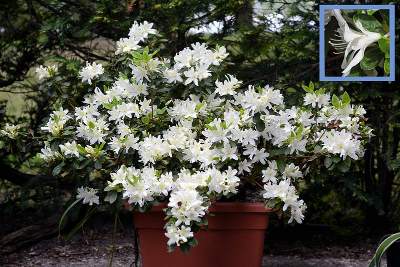 Azaleas are one of the most beautiful shrubs of all garden plants and grow, flower and thrive in pots for over 100 years. Azaleas require acidic soils, with good drainage and moisture retention so pots and containers are a great option if you have slow draining or alkaline soils. Azaleas also require partial shade so planting in pots allows you to move the plant to find the optimal balance of sun (for strong blooms) and shade (to protect the tender leaves).

Azaleas require potting soil that has the following characteristics:

Azaleas require a balance of soil that retains moisture effectively but also has a structure that allows excess water to drain away so that the soil does not become boggy as this would encourage root rot.

The way to achieve this is with soil that has a high organic content. 1/3 Compost or leaf mould 1/3 peat moss (or ericaceous compost) and 1/3 well rotted manure provides all the soil characteristics that a potted azalea requires and will ensure healthy growth.

Compost and leaf mould retain moisture and create a well draining structure whereas the peat moss provides the right acidic soil pH. Azaleas require acidic soil to able to take up nutrients from the soil and they will exhibit signs of stress (such as yellow leaves) in soil that is closer to neutral (pH 7) or alkaline soils.

If you do not have access to peat moss then ericacous soil is available online and in garden stores will ensure that you azalea has the correct soil pH.

Well rotted manure will provide a nutrient hit for the azaleas roots and help to retain moisture, but it can be substituted for compost or leaf mould if necessary.

I would also recommend that you use a layer of gravel at the bottom of the pot so that water flows efficiently out of the base. This will help to avoid compacted soil slowing down the drainage.

If your consider planting azaleas in the garden read my article, preparing garden soil for azaleas.

One of the key requirements when caring for azaleas is that the soil should be consistently moist but not saturated. Azaleas have shallow roots so they are often the first plants in the garden to show signs of drought.

Pots also have a tendency to dry out quicker then garden soil so careful watering is important. Always water azaleas generously so that water infiltrates the soil and trickles out of the base of the pot.

Specifically how often to water potted azaleas varies according to climate, weather and maturity of the plant so I have made a table to summarise how to often water you potted azalea according to the conditions:

To learn more read my article on how much and how often to water azaleas.

Azaleas are not especially heavy feeders and plants that are in nutrient rich garden soil can thrive without addition fertilizer.

However potted azaleas require a fertilizer to grow and flower to their best as there is a limited capacity for nutrients in potted soil and they do no benefit from the soils ecosystem to the same extent as azaleas planted in garden boarders.

The best fertilizer for azaleas in pots are slow release granules that are specifically formulated for azaleas (such as miracle grow).

The granules are easy to apply and contain the right balance of nutrients that azaleas require therefore there is no risk of over fertilizing in the plant which can damage the roots. They also contribute to maintaining the optimal acidic soil pH which helps to ensure nutrient uptake.

Fertilizing ensure healthy green leaves and promotes strong blooms so that the plant remains resistant to disease and can potentially live for more then 100 years.

Choosing the Right Pot for Azaleas

Azaleas can be grown in different types of pots and containers as long as it has drainage holes in the base. Ideally pots should be around 16 inches in diameter with clay or terracotta material.

You can grow azaleas in smaller pots initially but it is likely that you will have to re-pot the plant after a couple of years. A 16 inch pot contains enough soil to hold moisture and more soil helps to insulate the roots in Winter.

Azaleas prefer partial shade and dappled light with around 4 hours of sun per day (depending on the climate). In cooler temperate climates with more rainfall and overcast days (such as Scotland or Washington in the USA) an azalea can take full sun.

However in arid climates (such as California or Southern Europe) with intense sunshine the leaves of the azalea are susceptible to sun burn, flowers tend to wilt and the risk of drought is substantially increased. In these climates about four hours of morning sun with protection form the midday sun is ideal.

Azalea can grow in full shade but sunlight helps to stimulate the formation of flowers and can encourage better growth.

The great thing about growing azaleas in pots is that you can move the azalea around until you have found the optimal balance of sun and shade.

The goal is to find an area with enough protection from the wind, frost and midday sun, without shading the azalea to the extent that flowering could be negatively affected.

If the azalea is producing few flowers then move it to an area with more sun and if the azalea has scorched leaves it will require more hours of shade.

Dappled light under a relatively sparse tree canopy is always a great option as this mimics the azaleas natural habitat and protects against sun burning the leaves whilst offering enough light to produce a great bloom.

Care for Azaleas in Winter

Azaleas in pots are far more susceptible to freezing temperatures then azaleas planted in gardens.

The foliage of the azalea can tolerate freezing temperatures and it is the roots that are at greater risk of frost damaged. This is particularly true of azaleas as they are shallow rooted and actually thrive when somewhat pot bound.

There are a few options to protect potted azalea roots from freezing temperatures:

Planting your azalea in a pot that is 16 inches in diameter is a good idea in colder climates as larger pots have more soil capacity to help insulate the roots.

Do not water the azalea in Winter as the plant is dormant and additional water can increase the chance of fungal disease. Resume watering as soon as the weather warms up and you see new growth emerging.

From a maintenance stand point, the great news is azaleas do not require regular pruning in the same way plants such as roses or lavenders do every year so its one less task in the garden.

Smaller species of azaleas such as the alpine azaleas most of the time do not need any pruning and often maintain a desirable mound shape that displays the flowers relatively evenly.

However some occasional pruning of an azalea helps to maintain their appearance and shape, particularly if they have grown too large for their location.

You can prune at anytime of year but the best time is after flowering. Whilst azaleas don’t require annual pruning they are tolerant to being cut back so you do not have to be overly cautious. Pruning azaleas (or rhododendrons) is the same whether they are in pots or in a garden boarder.

Here is a YouTube video for a visual guide on pruning azaleas: