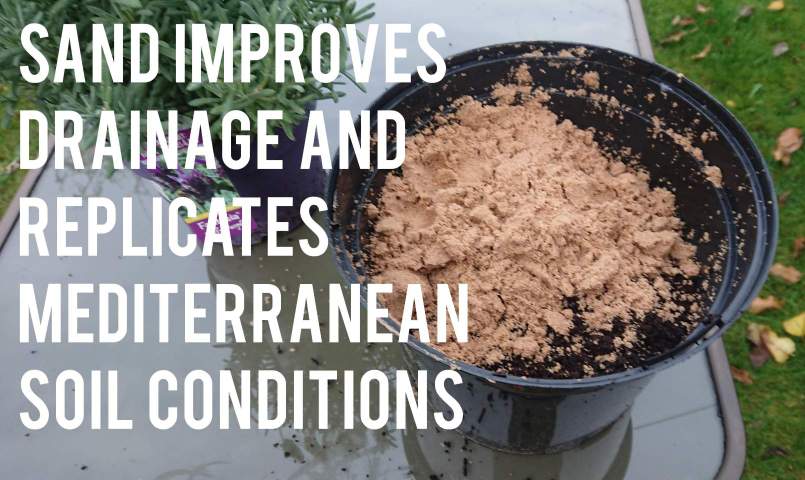 The best potting soil for woody Mediterranean herbs is a mix of 1/3 sand or grit to 2/3 compost for optimal levels of drainage, fertility and soil structure to ensure flavorful herbs. Non woody herbs such as basil and cilantro prefer multipurpose or garden compost without sand for more soil moisture.

The distinction between woody herbs that originate in the Mediterranean region of Europe and non woody herbs with green stems is important when it comes to choosing the right potting soil for your herbs.

Mediterranean herbs require sharp drainage and less moisture around the roots due to their adaptations to dryer climates and can support themselves with their woody structure.

Non woody herbs relies on a pressure caused by a vacuum caused by water loss from the leaves (transpiration) causing moisture in the potting soil to be drawn up through the roots which maintains their leafy green non woody structure.

A lot of the most popular herbs valued for both their aroma and culinary flavor originate from the Mediterranean region of Europe in countries such as Span, Italy and Greece where they grow abundantly in the wild and are grown as a commercially crop.

Therefore to grow flavorful Mediterranean herbs it is important to recreate the soil conditions of their native environment by amending your potting soil so that it resembles Mediterranean soil with gritty well draining sandy soil, that is relatively low in nutrients and does not hold onto moisture.

The following herbs all originate in the Mediterranean region and all require the same potting soil mix:

A sandy, gritty potting soil mimics the herbs preferred sandy soils which is crucial to avoid root rot and to ensure your herbs have the best taste and aroma.

Sand and grit provide the essential drainage qualities and do not contribute much nutrients to the soil or hold moisture which helps to increase the intensity of the aroma and flavor of your herbs.

Mediterranean herbs are specifically adapted to lower fertility soils, so if they are planted in nutrient rich compost with added fertilizer their distinctive aroma and flavor is not as strong and can be more vulnerable to pests and disease.

Excess nitrogen from nutrient rich soil promotes excess foliage and decreases the concentration of essential oils in the leaves which are responsible for the herbs aroma and flavor, and prevents the herbs from flowering.

In rich soil Mediterranean herbs do not taste as strong so it is better to replicate their natural growing conditions with lower fertility potting soil and good drainage so you can enjoy the distinctive fragrance and taste of your herbs when cooking.

(Read my article on choosing the best pots and containers for lavender).

It is important to re-emphasize that Mediterranean herbs prefer lower nutrients soils that drain very quickly and do not hold onto moisture.

If the potting soil has a high level of nitrogen then your herbs grow floppy, drooping over and are far more vulnerable to fungal disease, so always opt for multipurpose compost for your herbs rather then manure or compost with added nutrients as they are characteristically high in nitrogen which reduces the herbs flavor.

All Mediterranean herbs enjoy potting soil with good drainage, as they have specifically adapted to coping in climates with less available moisture with thinner needle like leaves that limit transpiration (water loss) from the leaves.

This ability to thrive in more arid climates does leave the plant more susceptible to root if they are in a potting soil that stays damp for a long time which is why the added grit or sand is so important.

(Read my article how to revive dying herbs).

In climates of high rainfall I recommend increasing the proportion of sand or grit to 50% (with 50% multipurpose compost) to counteract the higher amounts of rainfall causing damp conditions..

More sand or grit is always better then not enough when it comes to the potting soil of Mediterranean herbs due to their sensitivity to excess moisture and preference for dry conditions.

Mediterranean herbs have adapted to grow naturally in soil that is usually pH 7, neutral or slightly alkaline pH 7.1-8 but they can tolerate some moderate acidity of pH 6.5.

Good quality multipurpose compost is usually pH 7 and is appropriate potting soil for all Mediterranean herbs.

However it is important to avoid ericaceous (acidic) soil which is usually around pH 6 as this is too acidic for Mediterranean herbs which prevents the roots up taking nutrients and can kill the plant.

Whilst herbs such as basil, cilantro (parsley), mint, fennel, dill and chives can be used in Mediterranean cooking, they are not native to the Mediterranean region and therefore require different soil conditions, to the native woody Mediterranean herbs.

Herbs that do not originate from the hot and dry Mediterranean climate, require potting soil with a greater capacity to retain moisture for the roots to uptake when required.

The best potting soil for herbs such as basil, mint and cilantro is good quality multipurpose compost as it retains moisture to prevent wilting yet allows excess water to drain away. Multipurpose compost also has the right balance of nutrients and soil structure to ensure an intense flavor and allow the roots to establish.

Well rotted garden compost composed of garden waste and kitchen scraps (such as vegetable peelings) is also appropriate for potting up most non Mediterranean herbs due to its favorable structure and moisture retaining capacity.

Whilst potting compost, retains moisture it also has a friable structure that allows excess water to drain easily away rather then pool around the roots and cause root rot.

(Read my article, how often to water herbs).

Multipurpose compost (available from garden centers or online) does not need to be amended with other materials when growing herbs such as basil, cilantro (parsley), mint or chives as additional inorganic material (such as sand or grit) causes the soil to drain quicker then required which can cause these herbs to droop.

The moisture retaining capacity of the potting soil is the primary reason for the difference of preference of potting soil between herbs that originate from the Mediterranean which tend to be woody in structure whereas other herbs such as basil rely on a constant source of moisture at the roots and consistent transpiration from the leaves to maintain tugor pressure which allows the herbs to stand upright in the absence of a woody structure to support them.

Most non Mediterranean herbs are not fussy growers when it comes to potting soil but there are some soil amendments that you should avoid.

The reason herbs such as basil smell and taste so potent and distinctive is because of the concentration of essential oils in the leaves.

If you plant herbs in potting soil that is high in nutrients whether it is from prepared potting soils or amendments such as manure as this can promote foliage growth but decreases the concentration of essential oils which reduces the intensity of the taste and smell of your herbs.

Avoid adding coffee grounds to the potting soil when growing herbs. Coffee grounds are high in nitrogen which can reduce the taste and aroma of your herbs and causes excessive drooping foliage growth which leaves the herbs more vulnerable to pests and disease.

Leafy herbs that lack a woody structure also rely on a constant source of moisture to help maintain their structure and prevent the herbs drooping.

Any added sand or grit can cause the soil to drain too quickly, resulting in herbs that turn yellow and wilted due to drought stress.

(Read my article, choosing the best pots for herbs).