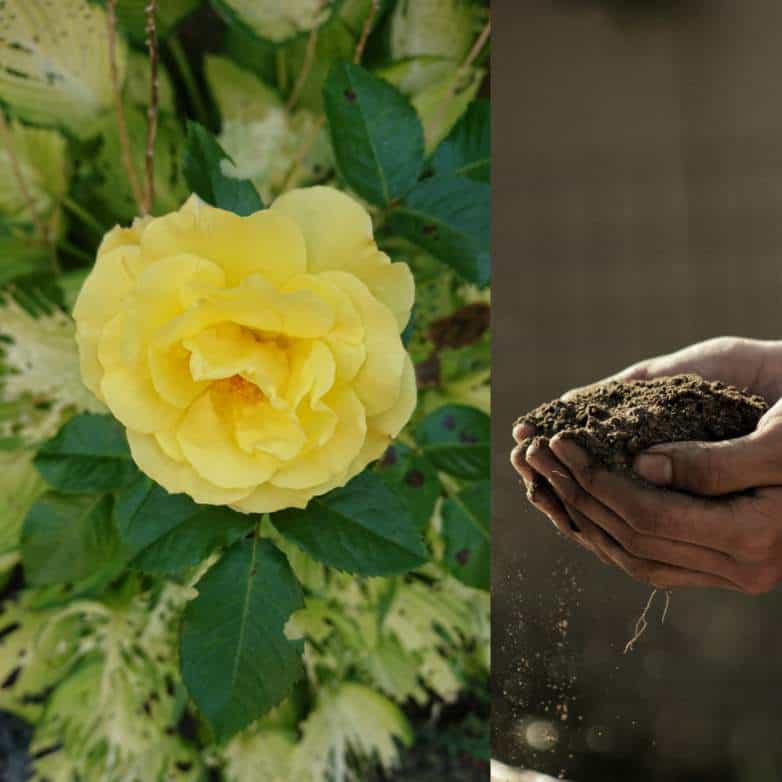 Applying mulch to your rose bed is one of the best ways to increase soil fertility, improve drainage, and promote healthy growth with plentiful flowers, but what mulch is the best for roses?

Lets look further what mulch is best to use in your rose garden for healthiest, disease resistant roses that produce spectacular blooms…

When it comes to growing roses, there are two problems with sandy soil:

However with a regular regime of mulch application you can still grow healthy, strong roses with plentiful blooms. Whilst roses do like well draining soil, sandy soils tend to drain too quickly for the roots to draw up any moisture.

The best mulch for sandy soils is leaf mould. Leaf mould has an exceptional capacity to absorb and hold onto water, yet leaf mould still has light structure that allows excess water to drain away which is the perfect balance for rose roots.

The best thing about leaf mould is that there is a huge bounty every fall. The easiest and most effective way to collect it is with a lawn mower. The lawn mower does the job of collecting and shredding for you, saving you a good amount of labour!

The resulting shredded leaves have a greater surface area then whole leaves and as a result they are broken down by the ecology of the soil at a much faster rate which is beneficial for the fertility of the soil.

Every autumn I raise the cutting deck of my mower and go around all the paths in the garden, and over the lawn collecting all the leaves far more efficiently then collecting by raking into a pile.

I place all the leaves along with some grass cuttings into a heap or compost bin to get the decomposition process started and leave them there over winter.

By the time the spring comes back round the leaves have decomposed enough to the point they resemble immature compost which is perfect.

Partially decomposed leaf mould feeds and stimulates the soils ecosystem retains water and will not blow away. The worms will start work and pull the material into the soil surrounding your rose which will change the profile of your sandy soil to a much more fertile and favourable condition in terms of moisture balance.

The leaf mould allows the roots of the rose to draw upon the stored moisture when it needs to and the soil dries out less quickly which means the rose will now be far more resistant to drought in hot, dry weather.

On sandy soils I like to apply leaf mould compost as mulch around the area of the rose at a depth of two inches twice a year. Always leave a few inches of bare soil between the rose canes and the newly applied leaf mould as the wood of the rose that is above ground is less tolerant to persistent exposure to moisture.

In gardens of poor fertility the best mulch to use for your roses is primarily horse manure.

If you have acquired fresh manure for your rose bed then I’m afraid you will have to play the long game.

Horse manure needs to rot down for about one season before you can use it on your garden, because fresh manure applied to your garden can burn the roots of your plants during its decomposition process.

You can tell when the manure is ready to apply because the unpleasant aroma will have gone completely and the texture is far more loose and crumbly.

To avoid unpleasant smells from fresh manure, add it to your regular compost heap and add plenty of brown material (straw, paper, brown leaves, cardboard). The brown material will prevent the manure from smelling and increase the rate of its decomposition.

I personally add the manure to my compost pile, cover it over with cardboard (to prevent weeds growing) and by the next season the manure enriched compost is ready to be applied to the roses, with fantastic results.

Chemical fertilizer is like a multivitamin whereas enriched mulch added to your rose bed is like a healthy diet as it adds long term fertility to the soil. The healthy diet is always better long term and I have seen some of the best rose blooms from roses that have had horse manure/compost mixed mulch regularly applied.

Best of all horse manure is usually free as it is an abundant waste product. Find someone with a horse or ask a local farmer and they will be happy for you to take it off their hands. You will be doing them a favour!

Some stables even have manure that has been piled up for years, so you can use it on your garden straight away without having to wait for it to decompose.

Best mulch for Roses in Heavy Soil such as Clay

Clay soil has an abundance of minerals and bio metals such as calcium, iron, magnesium and potassium- all of which are great for growing healthy roses. This is why loam soil (which contains 20% clay) is considered the best soil to have in your garden.

However if you have a high propoartion of clay in your garden then this can be problematic. The problems with heavy clay soil are as follows:

The antidote to this is adding plenty of organic material in the form of mulch. The best mulch is a mixture of leaf mould, grass clippings and compost made from kitchen scraps and garden waste.

By adding all this organic matter to the surface of the soil you can overtime change the structure of the soil into a light more crumbly texture. The improve soil texture will help excess water drain away from the roots which will be of great benefit for your roses.

The organic matter will also encourage more worm activity. The worms will work to pull down all that mulch into the soil and create more channels in the soil to let in air and allow water to drain. The channels also create space for the roots of your rose to grow so that they can make the most of the abundant beneficial minerals in the clay.

The addition of mulch on the surface will suppress weed growth and it makes it far easier for you to dig the weeds out when they do appear as it is so much easier to dig through amended soil rather then clay.

In some gardens where the drainage is particularly poor I will add some builder’s sharp sand or perlite. Both of these materials will increase the porosity of the soil and allow more air and water into the soil without altering the pH of the soil.

Ideally you will need to add this amendment before you plant your rose by digging a far larger hole then the size of the root ball and filling in the additional space with sand and organic compost.

However it is still effective to add sand or perlite as part of the mulch as it will work its way down into the soil by naturally through rainfall and as you water your rose every week. The ideal mixture is to use 2 thirds organic matter and 1 third sand when adding mulch to roses in clay soils to improve drainage.

A combination of leaf, grass, compost and well rotted maure, this will give structure increase the porocity, thus the infiltration rate, enrich the soil, bacteria, fungus, micro organisms

Why spend time weeding when you can spend that time admiring your roses and indulging in there intoxicating scent!

Adding mulch to the gardening is a very effective way to limit the growth of weeds to the point where it is only an occasional job rather then a common chore.

In my experience the best mulch for limiting weeds is straw, pine needles and wood chip (or wood bark). Out of these three I would favour the wood chip as it is more aesthetically and gives a ‘finished’ professional look to the roses bed but they are all effective options.

These forms of mulch are effective as they are able to exclude light and space for perennial weeds to grow.

Stubborn weeds such as nettles often have established roots in your soil but when covered in a 2 inch or more layer of wood bark they struggle to fight their way through to reach the light and may die from exhaustion.

Materials like pine needles and wood bark as also less inclined to let annual weeds such as dandelions to set seed, particularly compared with open soil.

I once maintained a rose bed for a client who lived next to an open meadow that was host to many varieties of weeds which released seeds with every gust of wind into their garden and fighting the weeds was a constant battle.

When the seeds of weeds land on nice fertile mulch with an open texture such as horse manure or compost then nearly every single seed will germinate and grow into a weed.

Once I applied wood bark around the roses the number of weeds establishing were few and far between. The seeds simply cannot germinate and establish roots and the more coarse wood bark.

The bottom layer of wood bark will eventually break down and add nutrients to the underlying soil too.

Wood bark can act as an effective weed suppressant for 2 or 3 years before you have to add another layer on top. And when weeds to occasional appear, they are easily hoed out as the layer of wood bark makes for a much easier texture to hoe into without much resistance.

3 years not having to weed every week sounds like a pretty sweet deal to me!

Wood bark also does a good job of keep the underlying soil (and thus the roses roots) nice and cool in the summer and insulated in the winter which is perfect. Wood bark also stops the soil form dying out too quickly on the baking hot summer days.