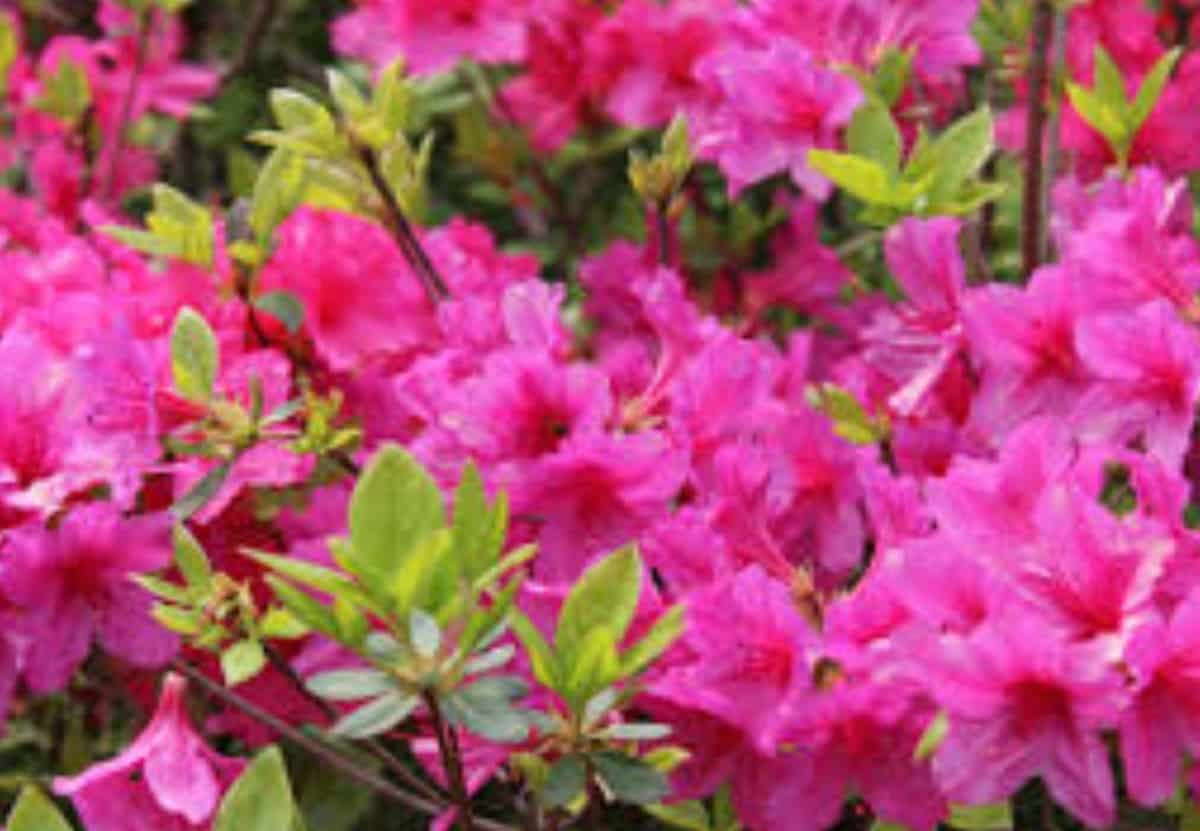 The 2 most significant factors that directly impact whether azaleas bloom are:

There are other reasons why your azalea may not be blooming but these are associated with signs of stress because of the growing conditions or misguided care practices for the azalea. Reasons such as:

Lets take a look at how these factors affect blooming and what to do to solve it.

One of the most common reasons for azaleas not flowering is due to a lack of sunshine.

Azaleas prefer partial shade, not full shade or full sun. Partial shade can be dappled light from a tree canopy during the day (this mimics their natural growing conditions) or it can be a few hours of sun followed by protection from the midday intense sunshine that can scorch the tender leaves.

Azaleas in full shade or with very little sun will not have enough light to stimulate flowering or there may be very few flowers.

To ensure a good bloom the following year, move the azalea to a location with 4 hour hours of morning sun with shade in the afternoon or cut back overhanging vegetation or anything else that may be casting too much shade on your azaleas.

The best time to transplant azaleas is in the Fall when the temperatures are not as high as summer but the soil is still warm enough for the roots to establish.

The key is to find the balance between the amount of sun to promote flowering and so the azalea does not have too much sun so that the leaves burn as the leaves are tender.

If you transfer you azaleas to pots then you can experiment to find the optimal balance of sun and shade in your climate so the azalea has enough light to promote blooms but not too much that the leaves get scorched in persistent sun.

In hot and dry climates (such as California or Southern Europe) it is advisable that the for the azalea to see 4 hours of morning sun at the most. This will be enough light for the azalea to bloom with enough protection for intense light.

In cooler climates with more overcast days (such as Washington or Scotland) azaleas can tolerate considerably more sun to help promote flowering, with less concerns of burning the foliage.

If a lack of light is the problem and you make the necessary adjustments to location then by the following growing season your azaleas should produce a better display of flowers.

Azalea blooms can be affected by temperatures because of:

Temperature is another significant factor for whether an azalea blooms.

A late Frost is often a culprit of claiming the flowers in Spring as the flowers are simply not frost resistant. Frost can turn new growth and flowers into a greyish sludge overnight.

The only thing you can do in this instance is to trim back the affected growth to stimulate new growth. Trimming back frost damaged azalea growth will also limit the vulnerability to disease.

Of course you can also protect the azalea with a cloche the day before an impending frost.

Azaleas have been cultivated to require a cooler period of winter dormancy as part of their cycle to help initiate blooms in the Spring with a warmer growing season for blooms and new growth.

The flower buds of the azalea develop in the previous summer from the flowers of that year. For flower bud production, a period of summer temperatures of 65- 70° F (18-21° C) degrees is considered optimal for next years flowering (although this can depend somewhat on the variety of azalea).

So if the summer temperatures are too hot or cold then the production of flower buds and therefore new years blooms will be adversely affected, hence why blooms vary from year to year.

In climates with high temperatures of over 86° F (30° C) in the summer can also have a cumulative affect on azaleas in terms of flower bud development and in particular the length of time an azalea flowers.

High temperatures will cause a flower to wilt quicker. Whilst watering frequently can help, azaleas are suited to climates that experience cooler temperatures in summer.

Pruning at the Wrong Time

Azaleas do not require pruning every year in the same way plants such as roses require.

However some occasional pruning can be useful to improve the shape of the azalea or to remove any damaged branches from wind or the effects Winter.

The best time to prune is straight after the azalea has flowered otherwise you risk cutting off the developing flower buds that will provide next years blooms if you cut back in the late Summer, Fall or Winter and will have to tolerate a year without flowering.

Poor soil that does not contain much nutrients will affect the health of the azalea and consequently the azalea may not bloom. Azaleas are not heavy feeders but they do require soils with a high organic content to thrive.

Sandy soils do not retain nutrients compared with loam soils or soils that have been amended with compost or other organic matter.

Soils that are particularly poor in phosphorus will cause azaleas and other plants not to bloom as phosphorus is associated with the development of flowers (nitrogen, potassium and other trace elements are also important for overall azalea health).

Azaleas benefit greatly when the soil has been prepared before planting with a range of organic material as this will provide the nutrients, soil structure and moisture balance that azaleas require. Read my article to learn how to prepare garden soil for planting azaleas.

Alternatively, if amending the soil is too difficult or time consuming, you can transfer the azalea to a pot or raised bed where you have control over the potting mix so that your azaleas can thrive and bloom.

Fertilizing the azalea every year in the Spring is often necessary in gardens with poor soil.

Azaleas are shallow rooted plants and require moist soil conditions therefore they are often the first plant in the garden to show signs of drought.

If the plant is just starting to wilt and the leaves begin to curl up then the azalea requires a generous soak and will appreciate a good mulch (such as leaf mould) to help lock in the moisture and the plant will recover in 24 hours.

However, persistent drought or drought at the wrong time of year can stunt growth and be to the determinant of azaleas Spring bloom. Azaleas require moist soil (but not saturated) all year round and if the ground is dry during the development of flower buds then the azalea will likely produce fewer flowers if bloom at all.

Read my article to learn how much and how often to water azaleas.

Well prepared soil, an application of mulch and knowing how often and how much to water you azalea will minimise the chance of drought, keep the azalea healthy and ensure the flower buds can develop for next years bloom.

Note that flowers will not last very long if there is too much sunshine combined with hot temperatures and arid conditions. Azaleas prefer partial shade with protection from intense sunshine which ensures their blooms last.

A common mishap by gardeners is to add fertilizer to azaleas at the wrong time of year and perhaps with the wrong type of fertilizer.

If the azalea is planted in well prepared soil then they do not necessarily require a fertilizer for a spectacular bloom and too much fertilizer can do more harm then good. However a fertilizer can benefit azaleas in poor soils if it is applied at the start of Spring (March/April).

If you add fertilizer too late in the Summer the Nitrogen will stimulate foliage growth at the expense of flowers. The leaves may be green and healthy but the azalea may not bloom properly.

I always recommend to use a fertilizer that is formulated specifically for azaleas such as miracle grow azalea plant food. This has all the nutrients that azaleas require at the right concentrations.

Azalea leaves are quite tender and nitrogen leaf burn can occur if the fertilizer is too strong hence the importance of using as specific product for azaleas.

Fertilizer can also help to maintain soil acidity which helps with nutrient uptake from the roots to keep the azalea healthy that it has the right conditions for blooming in the Spring.

Applying fertilizer too late in the season will stimulate new growth that will die in the first frost of Winter which leaves the azalea more vulnerable to disease.

Azaleas require and acidic soil of between pH 4-6 to grow well and to bloom. If the soil is closer to neutral (pH 7) or alkaline (any pH above 7) then the azalea will show signs of stress such as, yellow leaves, spindly growth and lack of blooms in the Spring.

In gardens with chalky, alkaline soils it is better to grow azaleas in pots as you have control over the soil characteristics.

To learn how to find out your soils pH and how to amend soil to ensure the correct level of acidity, read my article on solutions for azaleas with yellow leaves.